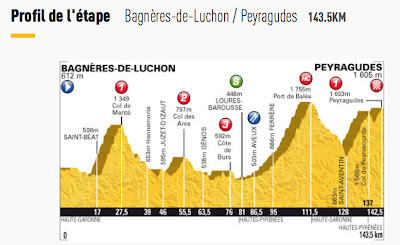 Today's stage is short and brutal – the sting in the tail of the mountain stages. The 143.5K course describes a big arc around Bagnères de Luchon with five categorised climbs before finishing at the ski station of Peyragudes. This will be last time that Bradley Wiggins and Chris Froome can be put under pressure. After yesterday's stage with the collapse of Cadel Evans, only Vincenzo Nibali can realistically challenge Wiggins and Froome and to date he hasn't been able to take a single second out of them despite several attacks.

It was clear yesterday that Nibali, Wiggins and Froome are the strongest in this year's race as the other riders left in the Yellow Jersey group were instantly blown away once Nibali attacked and the two Sky riders followed.

The forecast for Bagnères de Luchon is cooler than yesterday. Sky will seek to control the race as usual. Presumably a break will be allowed to get away. I suspect that the leading contenders won't start considering racing until the HC Port de Bales. They may even wait until the climb to Peyragudes, which includes climbing the Peyresourde – the side they descended yesterday. Thomas Voeckler will want to defend his slim four point lead in the Mountains  Jersey. Whether he will have the legs for another long attack is another matter. Equally does his principal rival – Fredrik Kessiakoff – have anything left?

Today could be a procession or there might be some exciting action towards the end.
Posted by Jim's Loire at 08:39