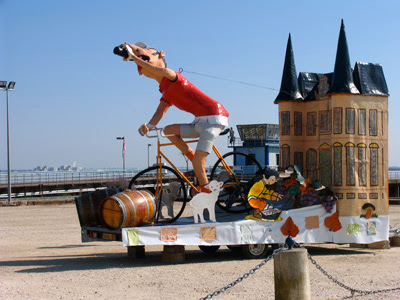 Today the 2012 Tour will take a 100K jaunt along the seaside from Le Tréport to Fécamp passing through Dieppe, although there won't be much time to relax with bucket and spade as the route will be relatively lumpy with a succession of chalk hills to climb and descend. At Frécamp the riders head inland for Rouen for a very likely bunch sprint.

There is a total of 214K today from Abbeville to Rouen with four 4th Category climbs – the last one comes at 143K – just after the intermediate sprint in Fécamp. The forecast looks benign with sunshine and cloud, temperatures in the early 20s and a light wind blowing off the land. The riders had better make the most of this as tomorrow's forecast is for heavy, local thundery showers with gusts up to 65 k/h.

There will be the usual contenders for the sprint with the probable exception of Marcel Kittel who has been suffering at the rear of the race over the last couple of days. Mark Cavendish is likely to have to go freelance again today, especially as Sky lost one of their riders – Sivtsov – yesterday. Cav, however, has shown on a number of occasions that he can win without a train to help him so he might today move up to 22 stages wins equal with sprinter André Darrigade. Doubtless André Griepel will be determined not to let this happen! Tyler Farrar will hope he can repeat his Independence Day win of last year on this 4th July.

It remains to be seen whether the redoubtable Michael Morkov, leader of the Mountains Jersey, will manage to get into a breakaway today for the fourth successive day to claim a few more climbing points. If he does it will be a surprise as he looked pretty well cooked towards the end of yesterday's stage.

I doubt if there will be any change overall. I would expect Cancellara to keep Yellow until the race gets to the Vosges on Saturday as the stages on Thursday and Friday are relatively flat.

15.45: Update: forecasters have got it wrong, rain forecast for later today has arrived with the peloton going through showers. Sunshine and showers – hope it is dry for the finish.
Posted by Jim's Loire at 08:28