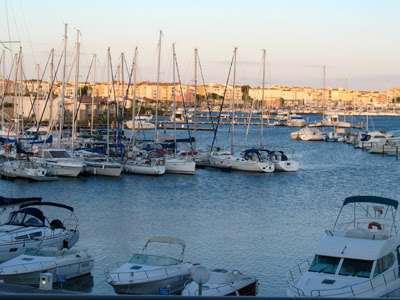 André Griepel won a tight sprint in Cap'Agde today with Peter Sagan a close second. Bradley Wiggins tried to lead out Edvard Boassen Hagen for the sprint victory but he didn't quite have the necessary speed and was overhauled by Griepel and Sagan in the last hundred metres. Sagan's second place has added considerably to his lead in the Green Jersey as Matthew Goss was not in the Yellow Jersey peloton, which numbered only 43 riders by the finish.

As I suspected might happen Mark Cavendish was dropped on the Mont Saint-Clair and was too far back to make it into the leading group. Cav will have to wait until Monday's finish in Pau for another chance of adding to his sole stage victory in this year's Tour. There were no changes to the Overall Leaders, so Bradley Wiggins has another day in Yellow. In the Green Jersey Peter Sagan now has 296 points with André Griepel on 232 points, Matthew Goss (203) and Mark Cavendish (129). Barring accidents Sagan's lead looks unassailable.
Posted by Jim's Loire at 16:15