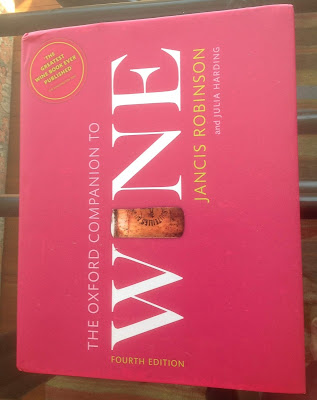 Jancis Robinson MW (editor) and Julia Harding MW (assistant editor): Oxford Companion to Wine – 4th edition, OUP, £40, 860 pages, hbk (publication date: 17th September 2015).
Here is the 4th edition of this remarkable work of wine scholarship.  Jancis explains in her preface that this revision has been the most ‘thorough’ with ‘every single entry has been subjected to intense scrutiny’. This new edition has 300 new entries out of a total of 4.104 – the third edition had 3930 entries.

She notes that: ‘Throughout the wine world, the emphasis continues to shift from ‘making’ to ‘growing’ wine, just as we are seeing a step change in the style of wine to which thoughtful producers aspire. In terms of wine structure and alcohol levels, big is no longer as beautiful as it was at the end of the last century. And the range of grape varieties harnessed for serious commercial wine production is wider than it has been for decades. ‘

‘Because the Companion was already very long and heavy (a common complaint which has inspired the publication of a digital version of this fourth edition), our esteemed publishers Oxford University Press were extremely strict with us about the total length of this new edition, which is less than 4% longer than the third edition in terms of the total number of words.’

It is interesting and obviously sensible that there is a digital version of this monumental reference book, whose printed version weighs in at 2.88 kilos. The Companion to Wine was first published in 1994 when printed books were king, kindle meant to start a fire and ‘ebooks’ would have been a ham actor attempting a Yorkshire accent.

I fancy that if the digital version is well publicized it may well out-sell the printed book on the grounds of practicality. The weight of the printed book means that it will stay in one place whereas the digital OCW can be at hand all the time. Add to this the ease of linking and connecting entries with each other and the advantages of the eOCW are clear.

Yet it is good to see that printed books continue to survive. There is something about owning and touching a book in comparison to an ebook even if it may be more practical. More cynically you can also show that you own a copy by displaying the tome on a coffee table or desk.