#TDF2015: Rohan Dennis goes like the wind – will wind cause chaos today? 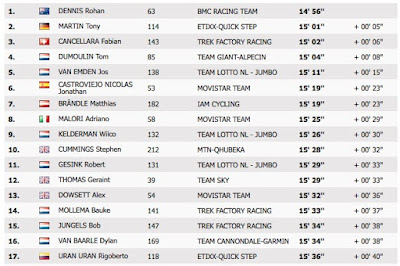 Previous World Record Hour holder Rohan Dennis surprised Tony Martin, Fabian Cancellara and Tom Dumoulin with a blistering ride around Utrecht. Dennis was the only rider to break 15 minutes completing the 13.8 kilometre course in a record speed of 55.446 kph (34.4 mph). He beat Tony Martin by five seconds, who finished in 15.01. Martin explained afterwards that he couldn't cope with the heat.

Vincenzo Nibali was the fastest of the four overall favourites finishing with 15.39, so leading Chris Froome (15.46), Alberto Contador (15.54) and Nairo Quintana (15.57). There were good rides by other overall contenders – Rigoberto Uran (15.36), Thibaut Pinot (15.37) and Tejay Van Garderen (15.38). These results appear to further confirm recent results that Chris Froome's time trialling form is considerably below what it was in 2012 and 2013. 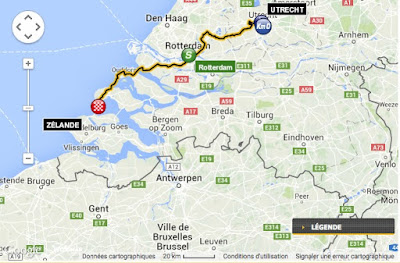 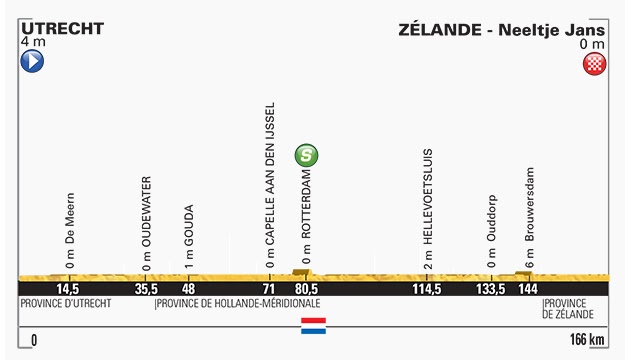 Today's stage (166 kms) really is pan flat – starting at 4 metres altitude in Utrecht much of the day is spent at sea level or one metre with the highest point being six metres. With no shelter from the wind this could be a very tricky stage with echelons forming and the potential for splits in the peloton. This will surely be a win for one of the sprinters with Mark Cavendish, Alexander Kristoff (28 today) and André Griepel being the most obvious favourites. Whether it is a big bunch sprint will delend on what effect the wind has.

Unfortunately there are likely to be crashes today, so hopefully everyone will come through safely.

It would be great to see Mark Cavendish notch up his 26th Tour de France stage win, especially as he hasn't won a stage since Saint Amand Montrond when he beat Peter Sagan in a stage where the wind blew the peloton into small groups.

Thanks Jim. Good summary as usual. Think Froome (and Contador for that matter) is a better all round rider now than when he excelled in the TT. better in the mountains now for sure and I believe he will win this Tour assuming no ill luck or injuries Should be a great Tour though with a good case being made for at least four for the GC and a number of interesting outsiders