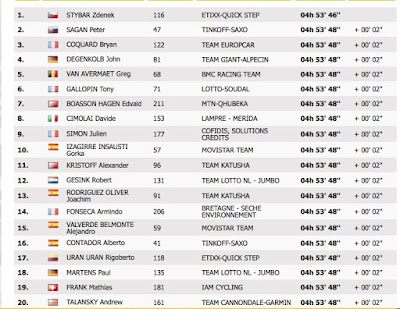 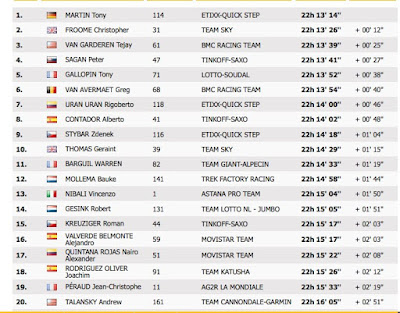 A mix of triumph and despair for Etixx-Quick Step yesterday with  Zdenek Stybar winning the stage, while team mate and Yellow jersey wearer Tony Martin crashed out on the final climb breaking his collar bone in several places. Martin is returning to Germany for surgery. Martin appeared to touch wheels and then overbalanced into another rider causing a crash which caught up Vincenzo Nibali. Only Martin appears to have been seriously injured. Wearing the Yellow Jersey seems to bring bad luck as Fabian Cancellara also crashed out while leading the race.

Losing Tony Martin is a big blow to Etixx-Quick Step – not only have they lost the Yellow Jersey but also they will miss Tony's power especially in the Team Time Trial on Sunday and for helping to leading out Mark Cavendish in the few sprint stages that remain.

Chris Froome is now leading the race and he will have the choice of whether he decides to wear Yellow today. Often in the past when the Yellow Jersey has had to abandon due to injury or a crash after finishing the stage, the next in line has decided not to don the jersey for the following stage. See here.
(Update: Chris Froome will not be wearing the Yellow Jersey today.)

On a much brighter note Daniel Teklehaimanot (MTN-Qhubeka) became the first black African to wear the Polka Dot jersey of the King of the Mountains, when he picked up all three mountain points on offer yesterday. There is one Category 4 climb very early on (12 kms) into today's stage, so as long as Joaquim Rodriguez, who has two mountain points, doesn't take it Teklehaimanot will hold onto the jersey. 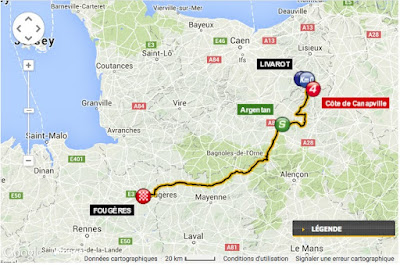 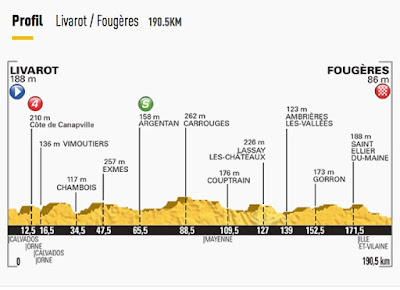 Today's stage should be made for the sprinters and it could be one of the last before the finish in Paris. The stages to Rodez and Valence may also turn out to be sprint stages, although they don't look straightforward. It may be difficult for an escape to get established as the intermediate sprint comes at 65.5 kms and the Green Jersey competition is hotting up with André Griepel's lead over Peter Sagan reduced to only 3 points – 161 to 158.

As the last kilometre profile shows the finish is slightly uphill. Given the few sprint stages left, an escape is unlikely to be allowed to stay away. Favourites for the sprint must be André Griepel and Peter Sagan but Mark Cavendish will be very keen to win here having missed out in Zealande and Amiens. 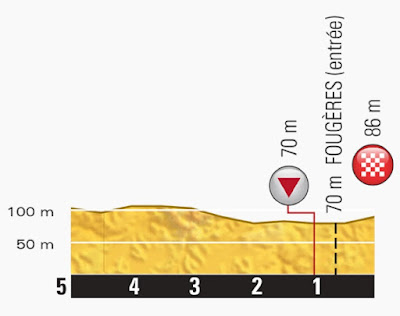