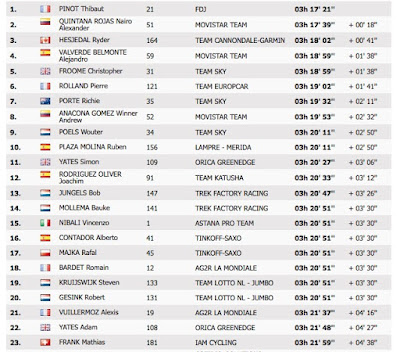 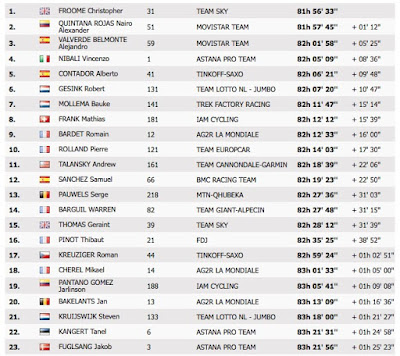 Yesterday was an exciting stage with Chris Froome really pushed by Nairo Quintana. Apparently Froome has been suffering from a chesty cold since the rest day in Gap, so the climb up to L'Alpe d'Huez trying to limit his time loss to Quintana was really hard. With a great attack Quintana managed to reduce his deficit to Froome to 1.12. He couldn't, however, prevent Chris Froome from winning the Tour for a second time as today's stage will be a procession into Paris with only the sprinters involved in a final gallop up the Avenue des Champs-Elysées.

Thibaut Pinot rescued his Tour with a fine stage win on top of L'Alpe d'Huez to make up for his disappointing showing earlier on in the Tour. Vincenzo Nibali was very unlucky to get a puncture at the base of the climb up the Alpe, which meant that his chance to get on the podium in Paris disappeared.

The other jersey competitions have also now been decided:

There is one point available on Stage 21 into Paris but this will change nothing as Chris Froome leads Nairo Quintana by 11 points.

Peter Sagan has again dominated the Points Competition, especially in the latter stages of the race. He leads André Griepel by over 100 points and cannot be caught even if he scores no points today.

Nairo Quintana has a comfortable lead of 14.48 over Romain Bardet, the leading French rider. Although overall the French riders have not finished as high up the General Classification as they did last year, there is hope for the future with three French riders in the top four of this competition albeit that Warren Barguil and Thibaut Pinot are over 37 minutes down on Quintana.
Stage 21: Sèvres-Gpso to Paris Champs-Élysées 109.5 kms 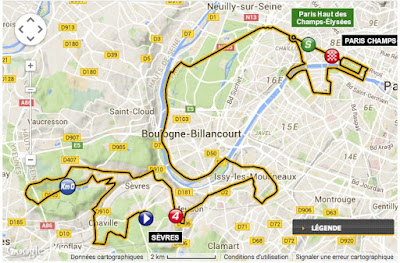 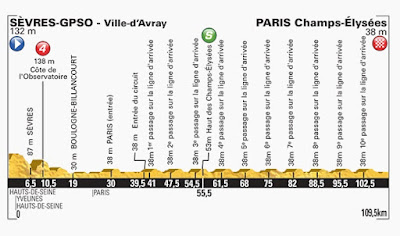 Today's stage will be a procession until the peloton reaches the Champs-Élysées when the sprinters will come out to play. The question will be how much did the mountains take out of them?

Although both André Griepel and Mark Cavendish both have weakened lead out teams, I still expect it will be between these two for the victory. Although Cav has lost Mark Renshaw, his lead out man, Mark is adept at going freestyle and knows the finish well having won here four times. Furthermore he has won here before without Renshaw. Peter Sagan will be up there but it would be a major surprise if he manages to win in Paris.
Posted by Jim's Loire at 10:53