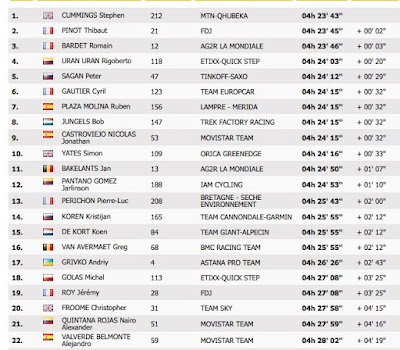 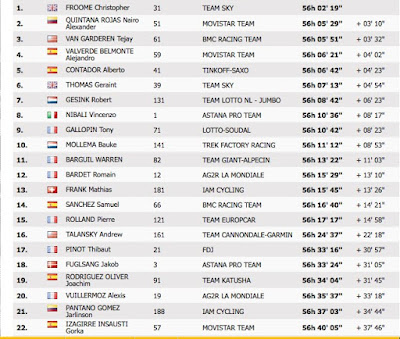 Overall after Stage 14: Chris Froome took more time out of his rivals

Sadly the victory of marred by an incident much earlier in the stage when a cup of urine was thrown at Chris Froome by a spectator shouting 'doper!'. This disgraceful and very sad behaviour may have been stirred up by some of the reporting and reaction on social media. It would be good to see a period of silence from the likes of Lance Armstrong, Michael Rasmussen, Laurent Jalabert and Cedric Vasseur.

At the end it was a good day for Chris Froome who gained some time on all of his rivals, albeit only a second on Nairo Quintana, who was the biggest threat to Froome on the steep Côte de la Croix Neuve. Froome gained 4 seconds on Valverde, 17 on Contador, 30 on Nibali and 40 on Van Garderen, who has slipped to third place overall with Quintana overtaking him.

It was also a good day for Peter Sagan, who got into the break, took maximum points at the intermediate sprint and then came in an impressive fifth on the stage despite being dropped on the final col. He now leads André Griepel in the Green Jersey contest by 61 points. With the Alps to come it is hard to see how Griepel can get back on terms.

If there were any dopes on the Tour yesterday it was Thibaut Pinot and Romain Bardet, who started fencing with each other after they reached the top of the Col, giving Cummings a chance to catch them. They then proved no match for his speed and bike handling and Cummings crossed the finishing line well in front. 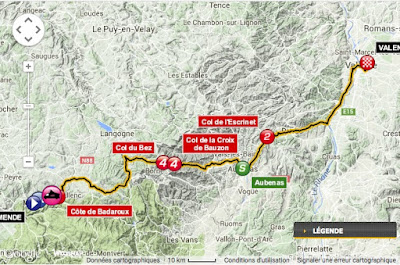 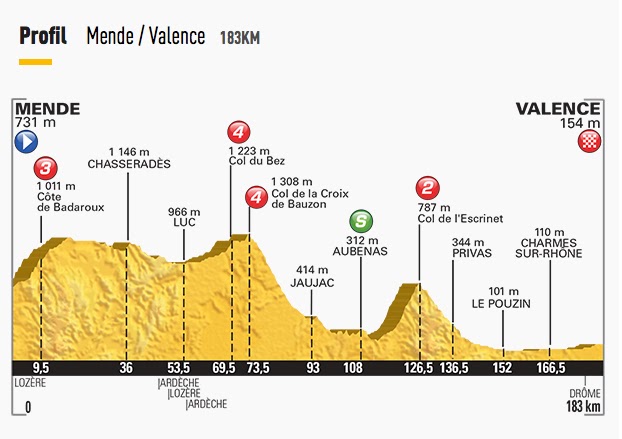 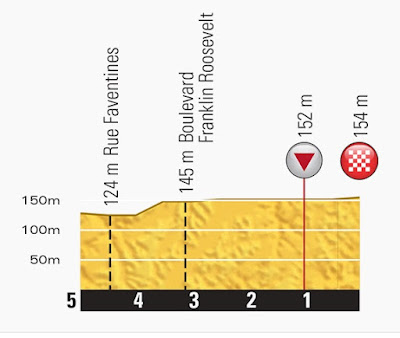 Today is a possible sprinters' stage if they can get over the lumpy firsy part of the stage and the 2nd Category Col de l'Escrinet at just under 60 kms to the finish. Mark Cavendish will have fond memories of this Col as he managed to get up it and won the sprint in Aubenas in 2009 taking his tally to nine TDF stage wins and making his the most successful British rider ever in the Tour. Today they will be going the other way through Aubenas and then up the Col de l'Escrinet – 7.9 kms in length with a gradient average of 5.8%. Will Tinkoff-Saxo go hard in the hope of shedding other sprinters like Cavendish and André Griepel? The finish in Valence looks to be ideal for a pure sprinter providing they are still in contention.

Jalabert has a cheek! I believe that the Sky team are drug free. Otherwise the whole tour might just as well pack up and go home if there are insinuations against the most successful. Perhaps I'm naive, but I hope not.

Thanks Gaynor. Yes that is my feeling. There is a world of difference between Chris Froome and the bullying personality of Armstrong, who destroyed the careers of clean riders. Jalabert has exposed himself as fourth rate at best – and I'm being kind!