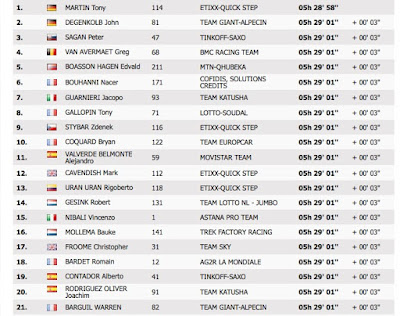 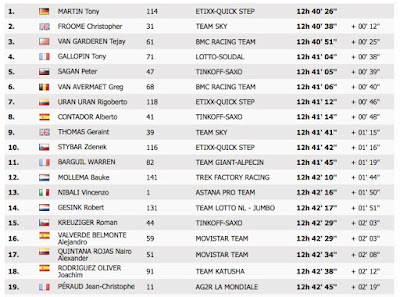 Overall after Stage 4: Tony Martin
has a 12 seconds lead from Chris Froome

Despite having a puncture just before the last section of cobbles and swopping his bike for that of his teammate Matteo Trentin, Tony Martin was still able to launch a solo attack from the leading group three kilometres from the finish. Helped by hesitation amongst the group Martin managed to stay away to win by three seconds and take the Yellow Jersey from Chris Froome by 12 seconds. His victory is his 5th TdF stage and the first time he has worn Yellow. This has made up for the disappointments of the first three stages where Tony missed out on winning the time trial by five seconds and then for the next two stages missing Yellow by just a second.

Although a supreme time triallist Martin's feat was all the more impressive because of the long chase to get back to the leading group following his puncture and that Trentin's bike was set up differently from his – higher saddle and brakes differently arranged.

Tony Martin should be able to hold the Yellow Jersey for the next few days and possibly until next Tuesday's first stage in the Pyrénnées. The leading GC contenders are likely be happy to see Martin in Yellow as he is no overall threat.

The good thing from yesterday's stage is that all of the leading contenders came through the cobbled stage without injury or losing time.

The list of all time Tour de France stage winners has been updated here to include Tony Martin's stage win yesterday.

Noir day for Pinot
In marked contrast to Martin, Thibaut Pinot had another nightmare day. Having a mechanical probem at the same time as Martin, he declined the offer of a teammate's bike and waiting for the team car, which inevitably took a while to come. The wait caused Pinot to lose his cool as he did again a bit further on when had further mechanical problems – a puncture. Overall he lost 3.23 on the stage.

It looks like Thibaut has found being one of the big French hopes too much and hasn't been able to handle the pressure. After a good opening time trial he was caught out by the wind and the splits in the peloton on Stage 2 and then didn't have the legs for Stage 3 and the climb of Le Mur de Huy. He is now 6.30 down on Chris Froome, so his hopes of a podium place must have evaporated. 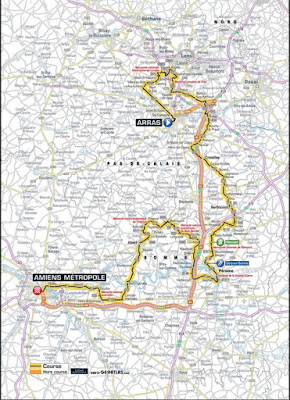 A sprint to Amiens
Provided cross winds don't play a part, this should end up a mass bunch sprint with these riders amongst the favourites: André Griepel, Mark Cavendish, Alexander Kristoff, Bryam Coquard and Nacer Bouhanni. Peter Sagan will be up there but it would be a surprise if he won this bunch sprint.