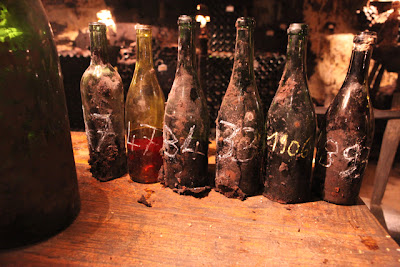 Bottles of Bourgueil from 1893 to 1947@Lamé Delisle Boucard
Providing robust and credible valuations for old bottles requires time and expertise, even then it may be impossible to establish provenance

This afternoon I have received some welcome responses from Elite Advisers through the Brunswick Group, the firm employed to handle their PR in the UK.

Ernst & Young Report
Work on the valuation report is on-going. There is no publication date fixed but Elite Advisers are keen to get the report published as soon as possible and published in a format that is comprehensible to their investors.

Ernst & Young are using data from Liv-ex. As Ernst & Young has not been in touch with Liv-ex I assume that this is the mid-price data (prices for 274 items with 1982 as the oldest vintage) that Liv-ex decided to send in late October to Elite Advisers to assist them in valuing the Nobles Crus wine fund. I understand from Liv-ex that this data covers around 40%-50% of wines in the fund by value. The data covers the more recent vintages in the fund – Liv-ex has already declined to value the old vintages because of the lack of robust data for these older wines.

It is not known how Ernst & Young will be able to produce robust valuations for the old wines bought from a variety of sources including merchants, restaurants and private collections. They may well have an extended stay in Switzerland where the Nobles Crus wines are stored – inspecting bottles individually assessing labels, the fill levels in bottles and their provenance – 'the intangible factors'. Provenance is decidedly tricky for very old vintages; a robust provenance may be almost impossible to establish. This is not to suggest for a moment that Elite Advisers did not buy in good faith; it is just the nature of the beast and why older vintages are, by their nature, illiquid especially if you have to sell a large number at one time.

One has to wonder whether Ernst & Young have the necessary expertise in-house to carry out such specialist work or will they be calling in experts?

The unanswered, and as yet unknown, multi-million euro question remains – how close to reality would the valuation of the Nobles Crus wine fund prove to be if redemptions rose to 15%-20%? Would they hold or would Elite Advisers find that the price they were offered when trying to sell substantial quantities of wine was actually in the order of 25%-30% lower than their valuation? In addition there are the staff and administration costs involved in selling wine, which may be around 20% of the value. The larger the fund grows the more critical this question becomes. Clearly, managing a 20% rate of redemptions for a fund worth 20€ million is a rather different order than for one valued at 120€ million.

'It also defended its valuation process – saying it takes the average of four prices from a list of 60 merchants and 10 auction houses, double checks the data with Winesearcher.com, and triple checks it using wine valuation expert Laurent Vialette. It is finally checked by the group's deposit bank CACEIS and audited by Deloitte.'

I haven't met Laurent Vialette but he must either be able to value wines remarkably rapidly or he operates as a charity since he would appear to charge less than 755 euros* for his valuable services and expertise. Does this sum permit Vialette to travel to Switzerland to carry out a detailed inspection of the wines?  (*Wine Experts Ltd had a turnover of just 755€ from October 2010 to 31st December 2011.) Even wine writing can be more remunerative!

Thank you, Jim, for the very cogent examination of the issues at hand in the Nobles Crus valuation issue

Thanks Charles. It looks increasingly apparent to me that knowing how the older stock is valued – by market data or actual inspection – is a really crucial element in the questions raised over the Nobles Crus wine fund.