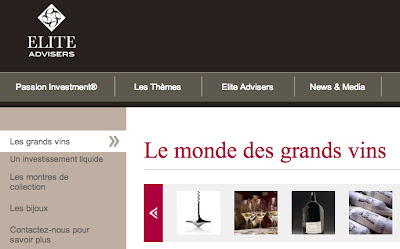 
On 22nd October it was announced with some fanfare that Elite Advisers, owners of the Nobles Crus wine fund, had appointed Ernst & Young to undertake a second audit on the wine fund. Deloittes in Luxembourg, where the fund is based, had carried out the first audit.

The news was carried initially by City Wire, and paperjam and later by The Drinks Business and decanter.com here.

paperjam, a financial media publication based in Luxembourg, said that the defintive Ernst & Young report would be published later this week and that  Elite Advisers were awaiting its publication with impatience.

The report in paperjam on Elite Advisers and Ernst & Young

Elite Advisers impatience to see the Ernst & Young report appears to have cooled somewhat. Now nearly a month on there is no sign of the report, as far as I know, and certainly no response to my repeated questions asking when it wil be published.

25th October 2012
In preparing the Decanter news story I asked both Miriam Mascherin, a co-founder and owner of Elite Advisers, and Alison Dykes of the Brunswick Group, Elite Advisers' London based PR company, when the report expected.
No response.


16th November 2012
Question to Alison Dykes of Brunswick:
Is there any news of when the Ernst & Young report on the valuation of the Nobles Crus wine fund will be published please? I did ask Miriam about ten days or so ago but have not received a reply.
As Alison Dykes was away I was asked to contact Jess Ayres, who kindly replied:
'I have passed  your message on to someone that can help you.'
Sadly a false hope – no response.

20th November 2012
Email to Jess Ayres:
'Unfortunately I have had no response from the person to whom you kindly passed my question about when the Ernst & Young report into the valuation of the Nobles Crus wine fund would be published.


On Monday 22nd October paperjam reported that this report would be published that week and that Elite Advisers were awaiting its publication with impatience. Nearly a month later there is no sign of the report and although I have now asked on three occasions when publication was expected, I have yet to receive an answer.

I would be very grateful if you would pass these questions onto someone who can help me.'
No response.

Why, I have to wonder, has there been no response to my simple question asking when the Ernst & Young Report will be published?

Have Ernst & Young run into similar problem – 'in the absence of readily determinable fair values'? that led to Deloittes' Emphasis of Matter in three successive audit reports on the Nobles Crus wine fund: