#loirevelo: some memories – many good; a few bad 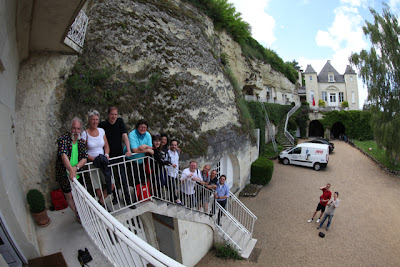 
Cycling: very well looked after by super-fit Christophe Marzais of Détours de Loire (35 Rue Charles Gilles, Tours – 02.47.61.22.23) and a revelation to see how many and how good the cycle paths are, especially along the Loire from Tours towards Vouvray and to the east of Saumur.

Vitiloire 2012: enjoyable despite the heat (around 30˚C). Great atmosphere and good to see so many people enjoying Loire wines.


Sunday lunch at L'Hélianthe, Ruelle Antoine Cristal, 49730 Turquant. Have long wanted to eat here and it lived up to expectations despite being very busy with everyone celebrating La Fête des Mères. Only one negative – why serve good Coteaux de l'Aubance from Domaine de Bablut in silly little flutes?


The view of the Château de Saumur at dinner on the Sunday night and some of the wines: Charles Joguet – 2009 Les Charmes and the two Les Varennes du Grand Clos 2005 and, especially, the 2009. Also 2010 Les Poyeux from the Vignerons de Saint-Cyr, a good example of a single vineyard wine from this well run cave co-opérative.

Good that the Saumur-Champigny appellation has banned the use of weedkillers in the vineyards except under the vines. The rest of the vineyard has to be either grassed over or cultivated. It would be even better if they banned weedkillers altogether as producers in Savennières Les Roches aux Moines have done but this is a considerable step in the right direction. Unfortunately Brussels has now decided that such measures can't be put into the rules of an appellation because allegedly they don't directly affect the taste of the wine. Presumably Brussels is not favour of aiding biodiversity. These new rules for Saumur-Champigny were agreed in 2008. Marie-Anne Simmoneau of the Syndicat des Producteurs de Saumur-Champigny told me that today they probably wouldn't be able to get a similar measure ratified. 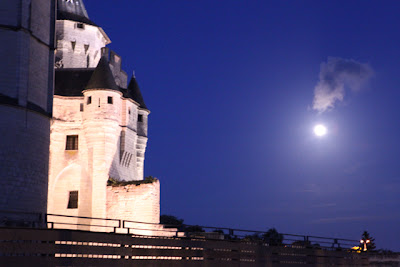 
and the less good:


Le Chien Jaune, 74 Rue Bernard Palissy, Tours. Appallingly slow service on Saturday lunchtime. Can they not cope with a group of 10 people? Almost certainly would have been better off grabbing something to eat within Vitiloire enclosure.
Le Duplex, 18 Place de la Résistance, Tours  – recently opened restaurant in the centre of Tours. A triumph of design over taste and style, although the main course of quail and sweetbreads was good. Minuses: mineral and austere 2011 Menetou-Salon from Domaine de Chatenoy served foie gras, over-warm 2010 Chinon from Olga Raffault and small ISO glasses. Also apparently refused to allow Charles Sydney to serve the wines he had brought with him with the dinner. Won't be rushing back.

Remarkably numerous and vicious mosquitos (single vineyard variety!) on cycle path close to the Thouet. Was attacked by a good 10-15 while trying to free Miss Vicky's bike of mud (or was it terroir?)

Pity Andrew Barrow wasn't able to join us due to an accident on the way to the airport. Hope his stiff neck is now better.

My thanks to Alex Chardonnereau and Hilkka Chartier (Interloire) for organising a really fun trip. The first press trip I have ever been on when the participants may have lost weight rather than gained it and almost certainly finished it fitter than they were when they started!

It was a great trip and many thanks to Hilkka and Alex of Vins de Loire. One of the most fun press trips I've ever been on. A great way to really get a feel for the region, including the local mozzies (i'm glad you were there as I'm usually the first to get attacked by them!) I'd love to go back and visit the region again but perhaps at a bit more leisurely pace :)

Jim, as far as mosquitos are concerned, I’m not sure what the Loire region does.
Here, they have replaced the traditional insecticides – especially around the Salses & Leucate Lake – by biological attacks (a bug which kills the larvae). Problem is: it needs to be sprayed at the very right time, and without too much wind, in order to be effective.

Another approach: invite me around. They love me and will by and large leave all other human beings in peace !

Luc. Happy to invite you whether you attract mosquitos or not. I'm rarely the first to be attacked my a mosquito and when I'm tend not to react badly to their bites. In this particular instance I was attempting to clear Miss Vicky's bike wheel of mud, so allowing to once more glide past the mudguard. We must have been close to a colony of the beasts!

Denise. An excellent idea to explore the Loire in greater detail and at a more leisurely pace.