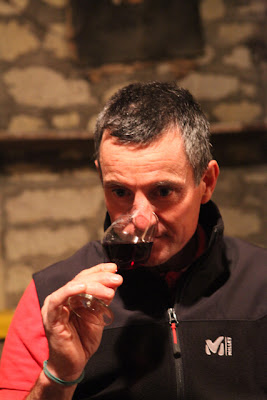 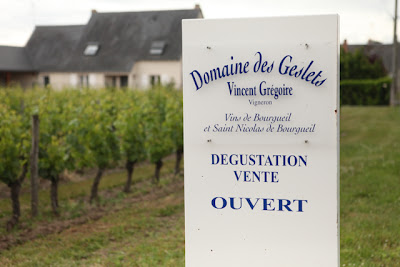 Following the tasting of Bourgueil last Saturday organised for Les 5 du Vin by Guillaume Lapaque I visted Vincent Gregoire's Domaine des Geslets as I had picked out two of his wines – 2011 Les Geslets from the gravels and 2009 L'Expression, the prestige cuvée from the limestone coteaux – during our blind tasting. Both wines are 100% Cabernet Franc. 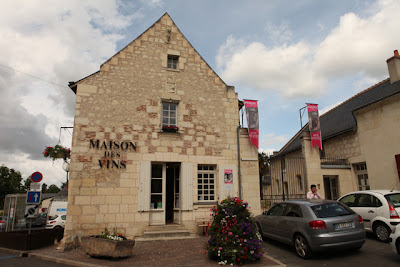 The Domaine des Geslets has 20 hectares of vines: 13 in Bourgueil and 7 in Saint-Nicolas-de-Bourgueil. Vincent Gregoire is the fourth generation to have farmed here. His great grandfather started here in 1882. In those days it was polyculture – asparagus and green beans etc. as well as vines. It was Vincent's father who changed direction and dedicated the domaine to solely making wine. Geslets is now in conversion to organic farming.

Vincent started working here in 1987. "If you had told me when I started that I would be working organically 25 years later, I would not have believed you! 20 years ago we thought that you could transform poor grapes into good wine by using new technology in the winery. Today we know that isn't true! The last year that I chaptalised was in 2000. I want to avoid using chaptalisation if at all possible. If my wines are at 11.5% alc, I wouldn't be shocked as long as the grapes are right and the wine isn't acid with green tannins." 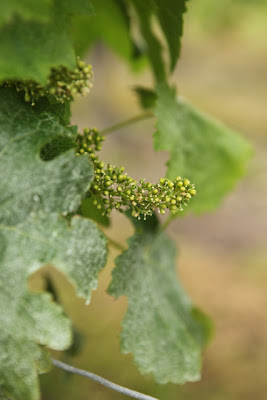 After looking at some of Vincent's vines and the chai we headed up to his cave at the top of the limestone coteaux. The coteaux section of Bourgueil and Saint-Nicolas-de-Bourgueil are honeycombed with caves. Most were originally quarries where the tuffeaux, the local limestone, was quarried out most famously to built the châteaux in this part of the Loire but also to build almost all the other more humble houses. Then some, the larger ones, were used for cultivating mushrooms. Now they are used for storing wine and some are also used for aging wine in barrel. Usually there is a shared entrance with a number of different caves each owned by each vigneron.

We tasted three vintages of L'Expression that is aged for 12-18 months, depending on the vintage, in 400 litre barrels. The rich 2003 is prune and figgy fruit and, despite the heat of 2003, is quite well balanced. Not as balanced as the fine 2005 which also has rich but fresher fruit and is very well balanced with good freshness in the long finish. We also tasted the 2007, which was a success for this difficult vintage. Much lighter it has easy drinking charm. 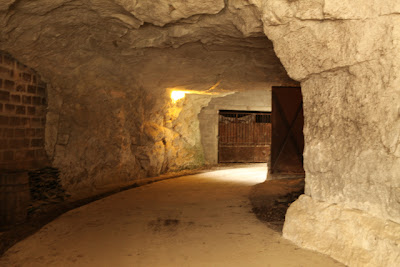 Part of the complex where Vincent Gregoire has his cave 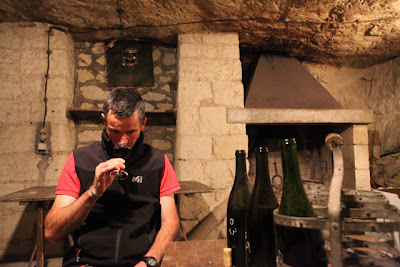 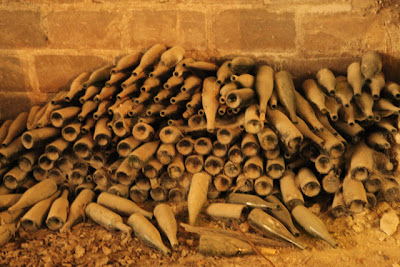 Empties in the common area of the complex of caves 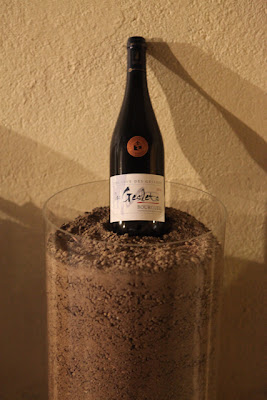 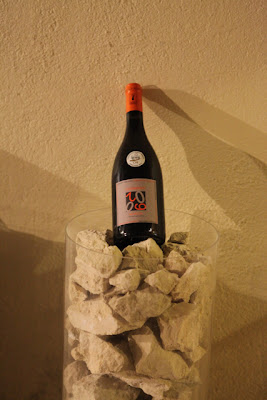 L'Expression on its limestone soil