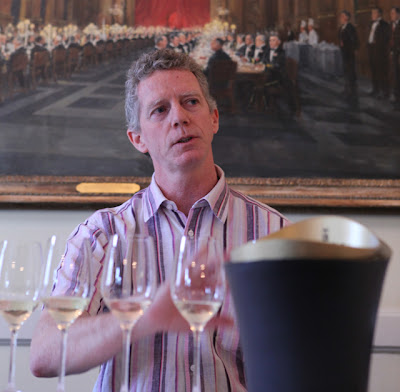 Two tastings on Wednesday: first a tasting of Canadian wines for the Circle of Wine Writers at the Naval Club in Mayfair and then down towards the north bank of the Thames for a large tasting of the J & B portfolio at The Portico Rooms of Somerset House.

The Canadian tasting was clearly and articulately presented by Keith Bown, who is vice president for winemaking for Vincor, part of Constellation Brands. I found the section on ice wines the most interesting, in part because it briefly raised the question of cryoextraction, which is banned in the making for all Canadian ice wine. I talked to Keith about cryoextraction after the tasting to find out whether he had had any experience of the process.

Keith has made ice wine in New Jersey using cryoextraction. "We would pick at normal ripeness, say 12%-13%, and then select some of the grapes and them into the freezer." Keith said that cryoextraction does involve concentration. Of course there is no suggestion that the grapes for Quarts de Chaume at Domaine des Baumard are picked as low as 12%-13%.

Although no Vidal ice wine was shown, Keith explained that the picking process for Vidal is different from that used for Riesling, Cabernet Franc etc. Those latter varieties are picked as soon as the temperature gets low enough. Instead for Vidal, which has a very thick skin, they wait for the grapes to freeze a number of times on the vine so that the cell structure starts to break down making it easier to press the grapes.

I’m happy to see Canadian Icewine may be trying to make inroads in a new market outside of Canada and its traditional export market of Hong Kong where it competes against imitations of its self. I like the Pinot Noir Icewines from the Okanagan best.