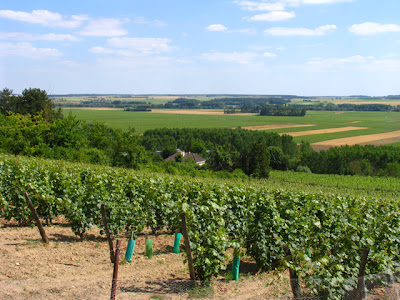 Fortunately this frost is nothing like as widespread as that of 1991 but there are sectors that have been seriously hit, although it will take a few days for the extent of the damage to be clear.

The largest area hit is to the east of Tours. The communes on the north side of the Cher – Chatillon, Noyers, St Romain, Couddes, Oisly, Thésée, Monthou and into the Sologne. There is frost damage throughout Cheverny and also damage in the Vendômois. In AC Valençay frost-prone sectors have also been hit.

There is more limited damage in some of the communes along the south of the Cher – like Mareuil, Pouillé and extending as far west as Saint-Georges-sur-Cher.

Noble Joué is also reported to have been hit. However, apparently little damage, if any, in Montlouis and Vouvray.

Sancerre, Pouilly-sur-Loire and Menetou-Salon appear to have escaped.

Chinon
Early estimates are that parts of AC Chinon have lost around 30% of the crop. Christophe Baudry (Baudry-Dutour) told me that the eastern part of AC is most hit – Cravant les Coteaux and Panzoult. Damage is much less in areas to the west of Chinon town like Savigny-en-Véron and Beaumont. However, Cravant-les-Coteaux represents some 40% of the appellation.

Bourgueil and Saint-Nicolas-de-Bourgueil
Little news for the moment although Joël Taluau reports that some vines in the low lying commune of La Taille have been hit. These vines on flat sand and gravel soils close to the Loire are quite frequently hit by frost.

No news further west for the moment but don't think Anjou was hit.

Grape varieties hit
Naturally it is the early varieties like Chardonnay, Pinot Noir, Orbois and Cabernet Franc which have been hardest hit, whereas later-budding Sauvignon Blanc has been less touched.

Further updates when I have them. Equally please send any news to me at budmac@btinternet.com