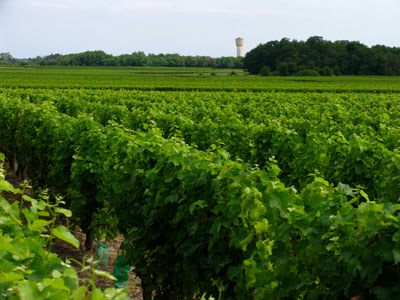 Oisly has emerged relatively unscathed with losses estimated at 10%. However, the neighbouring communes – Choussy to the west and Contres to the east – have been badly hit with probable damage estimated at between 50%-70%.

From Cathy Henton. Le Tasting Room
'We were at Châteaudu Petit Thouars and Domaine de la Noblaie today.  Michel said they had had a little damage, mainly in the young vine Chenin that was planted in 09/10. The leaves that were touching the vine guards have been affected.  He was not too distressed saying that it was only the young vines.  At Noblaie, Elodie said they had had a little too but nothing too serious.'

Elsewhere:
Parts of Sancerre have been hit after all. Gilles Crochet (Lucien Crochet in Bué) told me at a tasting in London today that his brother-in-law in Thauvenay had suffered 20% damage.

There may have been damage in parts of the Coteaux de l’Aubance but at present this is not thought to be significant.