Robert Parker: 'the blogger Budd, who has been reluctant to talk with us' – entirely incorrect! Nul points, RP! 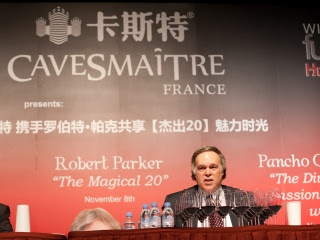 
Robert Parker alleged on his bulletin board last night that I had been 'reluctant to talk' to his lawyers carrying out the investigation into the Spanish visits organised by Pancho Campo MW on behalf of Jay Miller. This is entirely incorrect and Parker is mistaken as Harold Heckle and I have cooperated with his lawyer, Stephen Miller, who has been carrying out this investigation, who thanked us for our assistance.

'Re: What is the status of TWA's investigation into alleged Pancho Campo pay-to-taste?
I met with the lawyers last Wednesday....the last interviews of Campo and the blogger Budd, who has been reluctant to talk with us, should conclude this week....a final summary will be available to subscribers....it has been very expensive, very thorough, and I hope productive in establishing even tighter ethical rules,and how I can do a better job of managing the other writers....we took this very seriously,and I hope to have the final conclusions within several weeks...thanks for asking......'

In view of Robert Parker's damaging and inaccurate allegation that I have been 'reluctant to talk with us' I will expand on yesterday's update post on the investigations.

Firstly: At no time, as far as I'm aware, have Parker's lawyers asked to speak with me or interview me as part of their investigation.

Secondly: the only contact I have had with Stephen A. Miller of Cozen O'Connor has been by email. The timeline of our involvement is as follows:

1st December 2011: Robert Parker announces that he has set up an investigation.

'This firm is conducting an investigation on behalf of the Wine Advocate with respect to seminars and tastings conducted in Spain by Jay Miller in coordination with The Wine Academy of Spain. If you have documents or other pertinent information that you believe we should consider in the investigation, kindly let us know so we can schedule a mutually convenient time to meet and/or obtain copies of the relevant documents.'

'We will be happy to supply you with documents and pertinent information. I will be away in Montpellier on business from early tomorrow until late Wednesday. We will look to email you the necessary information once I return.'

'As promised the documents that we think are relevant for your investigation.

My apologies that this has taken a little time but I was away at Millésime Bio in Montpellier and then had to file my tax return by 31st January*.

Please find a word file containing emails sent concerning visits to Murcia, Madrid and Valencia. You will find the original emails in Spanish along with Harold Heckle's translation. As I think you know Harold is a fluent Spanish speaker and has long been based in Madrid as a journalist for Associated Press. There is one email original from the Valencia series that we have not yet been able to include – sent 21st November 2011 by Pamela Beltan. You do have Harold's translation. If you need the Spanish original, please let me know.

Also pdf documents from Asevin and DO Madrid.

Please come back to me if you require any clarification.'

(* The UK tax authorities require that all on-line tax returns must be filed by midnight 31st January. Late filers incur a fine. Important as Parker's investigation is my tax return took priority.)

8th February 2012: as I have had no reply from Stephen Miller I email him to ask if he received my email of 2nd February 2012 along with the documents.

'I received both emails. Thank you so much for your assistance.'

'Thanks for this. If we can be of further assistance please let us know.'


I leave readers to judge whether I have been 'reluctant to talk with us' (Robert Parker) as I'm entirely mystified by this allegation and have today emailed Stephen Miller asking for clarification.

Yawn....isn't this tempest in a thimble over yet??

Jason. It would appear not, although naturally you are not obliged to read these posts.

Ah, Mr. Parker is just answering a question asked on his closed forum, he’s going to represent and angle it his way to his benefit. If he had watched it unfold instead of jumping in with the American style of “Lawyers at 20 paces”, he would be redoing his guidelines and assuring his subscriber and the world its won’t happen again, as it is he has said he is tightening guidelines for his writers, and as is the American way after spending all the money on the lawyers they will say there really isn’t enough hard evidence to proceed (with anything).

You and your friends did a very good job of getting real information out to the wine drinking public, thank you for that.