'Yaya Touré' has another 'birthday party'! 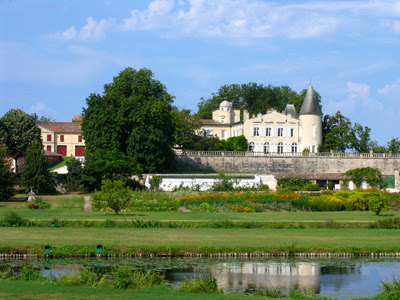 Château Lafite: a case of the 1986 for the birthday boy

Yaya Touré, who plays for Manchester City, is apparently having another 'birthday party'. This follows a party 'he had' at the end of November 2011 and at this rate he will be older by the end of 2012 than the veteran Ryan Giggs!
On 16th January 2012 Jim's Loire carried a story about a Luxembourg fine wine dealer being scammed by a fake football agent posing on behalf of Yaya Touré and Didier Drogba. Now the scamsters have targeted another fine wine merchant but this time in Belgium – T Kasteelke in Beveren-Waashttp, just to the west of Antwerp. Touré apparently has a 'new agent' called Ryan Campbell (email: sales-ryan@live.co.uk). The previous agent, Marc Bolane, appears to have disappeared. Touré – see below – has never heard of this Ryan Campbell.
On 16th February Steven Verstraeten, who runs T Kasteelke, was phoned by someone purporting to be Touré, who told Verstraeten that he was having a birthday party and would he contact his agent Ryan Campbell to sort out an order. Verstraeten sent a list of high-end wines he had available and received an order within half an hour.


Campbell's order:
'HAVE INFORMATION BY MR YAYA TOURE FOR ORDER WINE REGARDING IS HOUSE PARTY AND FOLLOWING IS BIRTHDAY PARTY.
PLEASE THE ORDER IS:

The agreed price was 103,349.50 euros. The delivery address given to Verstraeten was 182 Hither Green Lane, London SE13 6QB, UK – the same South London address used in the previous scam.

Fortunately the following day Verstraeten started to become suspicious when Campbell started pushing hard for the wine to be delivered as soon as possible. The initial impression given was that there was plenty of time – Touré's birthday is 13th May. Now he was told that the party was on 26th February.


Verstraeten: 'So I started to call some friends, because Yaya Toure played 5 years ago in my hometown Beveren, and they were saying that it was impossible because Yaya doesn’t drink alcohol. So I went on the internet and found the article on Decanter on In Vino Gildas.
On Friday 18th February Campbell emailed Verstraeten:
'I SPOKE TO THE ACCOUNT MANAGER FOR MR YAYA TOURE REGARDING THE TRANSFER,I SEND ALL THE PAPER WORK TO HIM .
THE TRANSFER CAN BY DO ON TUESDAY AND YOU WILL RECEIVE THE CONFIRMATION FOR THE TRANSFER BY FAX AND YOU CAN SEND THE GOOD WHEN YOU RECEIVE THE CONFIRMATION FOR THE TRANSFER BY BANK NATWEST.
THANK YOU FOR YOU CORPORATION
DELIVERY ADRESSE
182 HITHER GREEN LANE
SE13 6QB
LONDON
UK
MR
RYAN CAMPBELL
AGENT FOOTBALL YAYA TOURE'
Then as promised came confirmation from the bank. 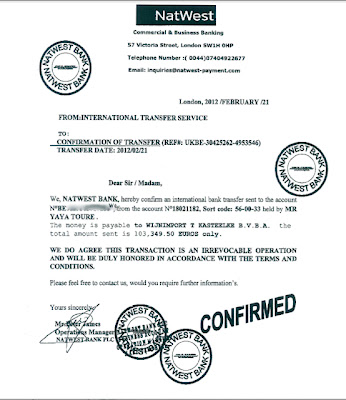 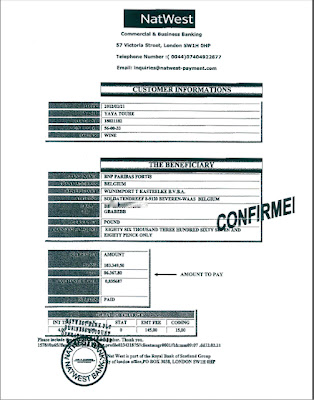 On February 21 Verstraeten received a faxed notice of an 'irrevocable transaction' purporting to come from the NatWest branch at 57 Victoria Street, London SW1H 0HP, tel: (0044) 07404922677, email: inquiries@natwest-payment.com. The phone number of the fake document is a mobile number, whereas the real number for the bank is 0845-3030943. In the previous scam a fake confirmation had been sent purporting to have come from a Barclays bank in Manchester.
Verstraeten continues: 'Yesterday morning he also called as a person of Natwest bank. He just confirmed the payment for mister Yaya Touré. But at that moment I already knew it was fake so I played the game.

And then yesterday afternoon they cancelled the order and since then he has disappeared.
I also contacted Manchester City for this – see additional mail.'


Steven,
I have checked with Yaya and he has never heard of Ryan Campbell and he certainly hasn't ordered any wine.
Kind regards,
Paul
*
First Luxembourg and now Belgium, fine wine merchants in northern Europe should be on the look out for this scam.

Sound inquiry. Wine merchants should take care about scams and crooks of this type since nobody's ever fully protected. Internet expands this kind of business; but do we know where does this mafia come from and if it is organised or just based on individual initiative?

Nico. Thanks. Good question – unlikely I think to be just an individual initiative. Has similarities with previous scams that have targeted French producers.

The important thing is to be vigilant – eg banks don't use mobile numbers as their main number on documents etc. Equally fine wine merchants when offered parcels of wines need to inquire carefully about their provenance.

My birthday is 8th of April - I turn 50. Too bad I don't drink expensive bottles.

Hervé. Find a good agent to convince people you are a good footballer – perhaps you have a chance yet!

I want to heartingly celebrate the Queens Jubilee over here in Canada!!!

Marc Wilmots was a gifted Belgian professional football player who signed up for top teams in Belgium but also in the Bundesliga. I think he even became some kind of coach for the Belgian national team. I remember – long time ago – him being interviewed on the tele after he scored a decisive – but easy – goal for his side. He amusingly said: “Even my grand-mother would have put this one in the net”.
The next morning, a major newspaper used this headline: “Marc Wilmots’s grand-mother is an excellent football player”, which I find refreshing.
Maybe Hervé stands in with a good chance, then. Problem is I know his winecellar – at least partly – and he owns far better wines than the one requested for Touré’s alleged party.

Hi, i'm a wine merchant in Chamonix, France and almost got caught out by this guy this morning... He wanted to do the transfer, I said okay but won't deliver the wine until the money is in the account. Of course needed it this weekend for a party so we agreed to do payment by card (which of course means if its a stolen card I lose all) and only for I googled his address did I find your blog and the other problems i'd have been out 1 Romanée Conti 1989, and 2 Echezaux DRC 1995 and 2003.

Went under the name Franck Smith, no football agents or anything but spoke to him on the phone and doesn't have British accent. Reported him to Fraud Squad in London but can't thank this blog enough and if you are ever in Chamonix I owe you a large glass of wine!

Jonathan. Thanks. Pleased you found the blog in time. Jim