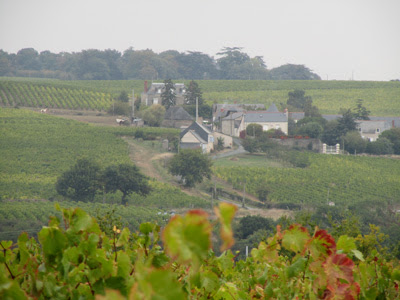 The new Quarts de Chaume Grand Cru along with Coteaux du Layon Premier Cru Chaume passed into law on 24th November 2011 folowing the approval of France's prime minister, François Fillion, and various other ministers including the minister of agriculture. The new décret (no2011-1614) and its cahier des charges replaced the previous décret of 2009.
So what's in the Q de C 11-page cahier des charges?
The document is split into three chapters: the first sets out the rules, the second covers adminsitration and the third explains how the rules are to be enforced.
Chapter One
The Quarts de Chaume appellation was first legally recognised on 10th August 1954. Grand cru can now be added to the name. The AC is within the commune of Rochefort-sur-Loire. The wines can only come from the 'ténement of Chaume' from the 'lieu-dits' of Les Quarts, Les Roueres and Le Veau.
The wines should be made and aged within the commune of Rochefort, although there can be a special dispensation for 24 nearby communes within the Maine et Loire départment. These communes include Brissac-Quincé, Mozé-sur-Louet, Saint-Lambert-sur-Lattay, Savennières and Thouarcé. This recognises that a number of producers have small parcels in Quarts with their wineries a little distance away.
Chenin Blanc is the sole permitted variety – nothing controversial here!
Minimum of 5000 vines per hectare and the vines have to be pruned by 30th April. The maximum permitted weight of grapes on each vine is 1.7 kilos. There can be no more than 20% missing or dead vines and the vineyard has to be properly looked after and its physical and biological nature has to be preserved. The area around vineyards should have grass or other plants growing on it, if I have understood 'un couvert végétal des tournières' correctly. Also no irrigation allowed.


Harvest
The grapes have to be overripe when they are harvested – affected or not by botytris (Jim: obviously this will depend upon the climatic conditions in any particular year). Picking has to be by hand and with several sweeps through the vineyard. Grapes in any container used to transport the harvest cannot be more than a metre deep. Trailers that use a screw to empty the grapes are banned.


Grapes should not be picked if they have under 298 grams of sugar per litre of must. Wines must have a minimum potential alcohol of 18% and after fermentation should not be below 11% alcohol.


(Jim: The requirement of 18% potential may appear high and, indeed, back in 1989 18%-19% was considered newsworthy. However, potential degrees of over 20 are now commonplace with modern viticulture – lower yields and better exposed grapes etc. – especially in well-sited vineyards. Chenin Blanc has the facility to develop high sugar levels, although chasing very high levels of potential alcohol would appear to be now a thing of the past. Now the concern is to achieve a balance between concentration and freshness in the finish along with drinkability.)


Providing vines have been planted before 31st July, the grapes can be used in Q de C three years after planting.


After fermentation the wines must have a minimum of 85 g/l residual sugar. The use of wood chips or the addition of sugar is banned and no treatment that lowers grapes below -5C is permitted.
(Jim: This rules out cryoextraction/cryoselection as this requires temperatures down to at least -7C. Cryoextraction/cryoselection is to be allowed until the 2020 harvest – see Part 2.)

•
Geographic situation
40 hectares in the Quarts de Chaume overlooking a meander in the River Layon with vineyards between 25 metres to 75 metres above sea level. The Quarts de Chaume is largely schist. In many places soil has largely been eroded – sometimes leaving the bedrock exposed. In the main, however, the vines are planted in a very tthin clay topsoil. The soils allied with the slopes makes for very well drained soils but with little potential of conserving water.
Climate is oceanic with the big advantage of being protected by the Massif des Mauges to the south-west of the town of Chalonnes. Rainfall in the Q de C averages 600mm per annum, while it is 800mm in the Mauges. The small Bézigon Valley formed by a meander of the Layon encourages morning autumn mists. Furthermore the Quarts de Chaume is protected from winds from the north, west and east and benefits from a lot of sunshine that warms up the stony soil quickly in spring. The presence of green oaks, mimosas and almond trees reflects this douceur angevin.
(Part two of the décret to be posted soon.)