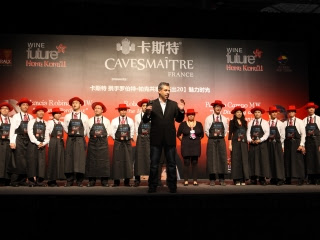 A leading role in 2012 for CavesMaître, France in Campo's Wine Academy?
My thanks to a source for passing on this release from ‘The Wine Academy’ previously known as The Wine Academy of Spain’
'THE WINE ACADEMY RENEWS ITS PROGRAMMES AND ITS CORPORATE IMAGE FOR THE 2012 SEASON
The Wine Academy

-Expansion into emerging markets in Asia and South America is one of the 2012 business targets
-The company becomes part of a larger organization dedicated to the management of corporate, music, sports and lifestyle events (1)
Marbella, February 1, 2012.
The Wine Academy renews its business objectives for the 2012 season. The company has changed its corporate image with a new website www.thewineacademy.es (TWA) which describes the services and activities developed for the wine sector.
In the first period of 2012, TWA is scheduled to continue with the programmes known as Spanish Wine Experience and Spanish Lifestyle Experience in the regions that are experimenting a considerable growth of their economies, as well as of the luxury and wine sectors, such as Asia, U.S. and South America. These programmes are aimed at the international promotion of Spain, its tourism and its wines.
The Wine Academy will be part of a much larger organization (2) that takes over its activities. This company, dedicated to the organization and management of events in areas such as music, sports and lifestyle, as well as unique travel tourism, wants to expand its offerings by providing events in the wine industry, taking advantage of the experience of the team at The Wine Academy.
TWA´s aim is to expand into new areas including organization of international events as well as wine related ones. It is because of this new international approach that the company has decided to abolish 'of Spain' from its trademark.(3)
The company presented this week, as their newest educational proposal, a course on "Marketing, Sales and Organization of Events in the Wine Industry" which is to be held for the first time in Marbella on the 13th, 14th and 15th of April (web) (4).
NEW WEBSITE AND PROMOTE A SOCIAL NETWORK
The company´s web development team explained that the new corporate image and scope of activities of The Wine Academy also features a new website, which is "cleaner, more accessible and easier to view”, which will make its contents much more accessible through social media networks".
Social media networks are one of the key points for developing the new corporate image of TWA, with over 5,000 followers on Facebook and almost a thousand on Twitter. Also, the personal profile of Pancho Campo Twitter (@panchocampo) has changed its appearance under the new business structure, which will offer his views on the different areas of expertise of the organization, such as wine, sports, lifestyle and entertainment.
Joining a large event management will help maximize the professional knowledge and experience of The Wine Academy team in areas such as sport, concerts, shows, conferences and international seminars, as well as those carried out in the wine industry with the participation of personalities such as Al Gore, Kofi Annan, Robert Parker, Miguel Torres, Michel Rolland or filmmaker and winemaker Francis Ford Coppola, among others.
Más información - More information:
Alberto Garcia media@thewineacademy.es | M. +34 636 704 097
T. +34 952 830 806 | F. +34 952 838 732
www.thewineacademy.es
The Wine Academy:
The Wine Academy, es una organización privada, fundada en el año 2003 por Pancho Campo MW, primer español en conseguir el título Master Of Wine. Centra sus actividades en la formación de profesionales del vino y aficionados; la promoción internacional del vino español, a través del programa Spanish Wine Education; la promoción de España como destino enoturístico; el análisis del impacto del cambio climático en la industria; y los viajes de estudio a zonas vinícolas, en colaboración con la Universidad de California Davis (EE.UU.). Asimismo, imparte los cursos en toda España de la Wine & Spirit Education Trust (WSET) ha organizado el Congreso Mundial de Cambio Climático y Vino, Winefuture-Rioja’09 y Vinoble 2010.
The Wine Academy is a private organisation founded in 2003 by Pancho Campo, the first and only Spaniard to hold the title of Master of Wine (5). Its activities are centred around the education of both wine professionals and aficionados alike; the international promotion of Spanish Wines, through the Spanish Wine Education Programme; the promotion of Spain as a destination for Wine Tourism; the analysis of the impact of climate change on the sector; the organisation of trips to other wine producing regions, with the collaboration of The University of California Davis; and organising trips and seminars about advances in oenology, viticulture and marketing. It also instructs the courses of the Wine and Spirit Education Trust (WSET), the leading British organisation for education within the wine trade throughout Spain, and has organised the Climate Change and Wine World Conference, among other events.
••
Yesterday’s release from Marbella raises a number of questions and observations – it is long on promise and short on substance.
1) 'management of corporate, music, sports and lifestyle events’ – the halcyon days of Dubai.
2) ‘The Wine Academy will be part of a much larger organization’
‘a much larger organization’ not named. When it was founded in 2003 The Wine Academy was part of a larger organization – the greatly vaunted CIE Marbella – Centre for International Education for Marbella – offering ‘university degrees and career training courses’.
3) It is because of this new international approach that the company has decided to abolish 'of Spain' from its trademark.
In the circumstances it may be wise to drop Spain from The Wine Academy title. However, there are plenty of other wine academies so there may well be room for plenty of confusion. See here:
http://www.thewineacademy.co.uk
http://www.londonwineacademy.com/
Society of Wine Educators - The Wine Academy
www.societyofwineeducators.org/wine_academy.php
https://awcwineacademy.com/academy
Part of the Antique Wine Company
Academy of Wine Communications: http://academyofwine.org
Fortunately there is an elegant solution as Campo’s Wine Academy is registered on at Watergate on the coast of Florida – The Watergate Wine Academy. Memorable, instantly recognizable and with a certain cachet – in this instance I will be happy to forego my consultancy fee. 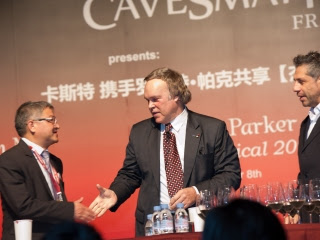 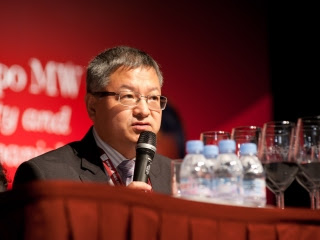 Daniel Li (boss of Chinese Castel): keynote speech@TWA April event in Marbella?
4) ‘Marketing, Sales and Organization of Events in the Wine Industry’ – could be an exciting April event in Marbella. Will we see an early return Jay Miller to Iberia to give a keynote speech on export seminars and las catas magistrales? Perhaps from neighbouring France the whole event will be sponsored by CavesMaître, France with Daniel Li explaining how he pulled off the coup of having Robert Parker present his ‘magical tasting’ under the logo of Castel in Chinese, whose trademark Señor li has astutely registered in China.
5) Pancho Campo, the first and only Spaniard to hold the title of Master of Wine
A patently false claim: Campo was born in Chile, so is the first and, so far, only Chilean MW who also happens to live in Spain. Pedro Ballesteros Torres is the only native Spanish MW. He is currently based in Brussels. 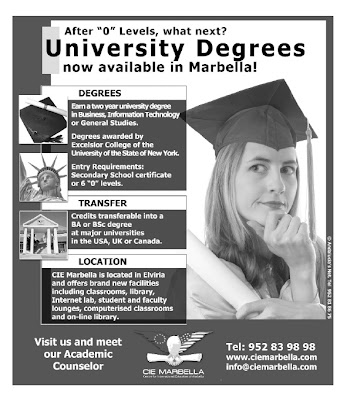 'University degrees now available in Marbella': publicity for CIE Marbella circa 2004
Posted by Jim's Loire at 00:02

Hi Jim. Any idea how the Institute of Masters of Wine investigation into Pancho Campo is going? It seems to have had a kind of "government inquiry" effect — damping down further discussion while taking its time before kicking subject into long grass, to mix metaphors.

Thanks for your comment. No idea how the IMW investigation is going – no approach to either Harold or myself. We have heard from Parker's lwayer and I will be posting shortly on this.

I think it is not surprising that there hasn't been much discussion or new postings as since Jay Miller has now retired Pancho Campo is no longer involved in organising visits for The Wine Advocate. Instead he would appear to be changing tack and returning to his roots by broadening his impressario role.