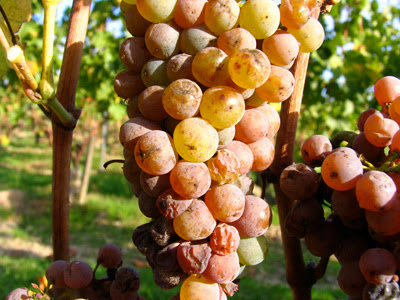 The following post by 'fat boy' on the winedisorder forum raises the interesting question as to how far the improvements in the sweet wines of the Loire, especially in Anjou, are down to hotter summers/global warming or improved/modern viticulture. 'fat boy' picks up on my comment in the first post on the first part of the new Quarts de Chaume décret.
"The requirement of 18% potential may appear high and, indeed, back in 1989 18%-19% was considered newsworthy. However, potential degrees of over 20 are now commonplace with modern viticulture lower yields and better-exposed grapes etc. especially in well-sited vineyards. Chenin Blanc has the facility to develop high sugar levels, although chasing very high levels of potential alcohol would appear to be now a thing of the past. Now the concern is to achieve a balance between concentration and freshness in the finish along with drinkability."
no disrespect to jim, who is simply repeating what many folks are wont to say, but this is too f***ing awesome not to treasure and keep.
have i noticed that the summers are getting warmer?
"no" i will reply. "it's just modern viticulture"
thinning icecaps?
"oui, oui, modern viticulture"
what about all those changing patterns of droughts, floods and storms?
""modern viticulture. it is teh shit, dontcha know?"
fb.
posted by fatboy 2-19-2012 6:44am
http://winedisorder.com/comment/56/5991/
••
'fat boy' is incorrect to allege that I am 'simply repeating what many folks are wont to say' as my comments are based on over 20 years of regular visits to the Loire. It is, however, reasonable to suggest that climate change has been a factor in the improvement in the sweet wines from Anjou over the past 20 or more years. During the 1990s and since the millennium growers have not had to contend with the difficulties that some of the vintages of the 1960s and 1970s threw at them. But changes to viticultural practices have been the biggest factor in the renaissance of sweet wine in Anjou.
Although there were stirrings from the mid-1980s, 1989 was the year that showed both what was possible and also illustrated how far much of the sweet wine of Anjou had fallen as the potential alcohol levels of 18/19% in 1989 were exceptional. 1989 was a glorious summer and autumn and in the same conditions today 18/19% potential alcohol would probably be the level for 'generic' Coteaux du Layon/ Coteaux de l'Aubance with many of the prestige cuvées into the mid 20s.
The change has come about because producers have rediscovered the old art of picking selectively that had largely fallen into abeyance in from the mid-1960s to the mid to late 1980s. Yields have been reduced, deleafing and exposing individual bunches of well-aerated grapes to the sun has become the norm – see photo below. Previously bunches were often hidden amongst the foliage. 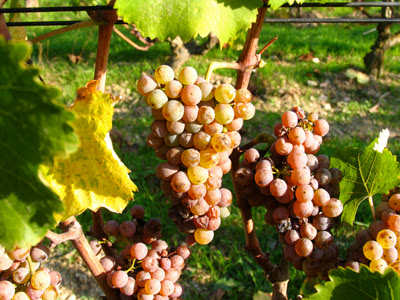 By 1997 a few Coteaux du Layon producers were competing to see how far they could go in the potential alcohol stakes. As far as I know Jo Pithon holds the record for picking grapes – admittedly selected grape by grape – with a potential alcohol of 50%. An interesting demonstration of what Chenin can produce in the Layon but hardly a commercial and marketable proposition as the must will barely ferment due to the quantity of sugar. Tokaji Essencia is its closest equivalent. The climate may have changed between 1989 and 1997 but not by that much.
Posted by Jim's Loire at 00:02

The huge changes are illustrated by an interesting comment from a Bonnezeaux producer in 1989 : 'I picked at 16° potential - never seen anything like it in my life - so I chaptalised up to 19°'

I asked why - and am still bemused by the answer, which was 'if I don't chaptalise in a year like this, when will I?'.

Which leads me to Stéphane Branchereau's comment a few years back ... sitting on the Onnis vineyard at the top of Chaume, he compared the year with 1987, suggesting the conditions were similar, but that the real difference was that back in '87 they'd probably picked at 11° and chaptalised up to 18 but that 'this year' they'd get 18 or more if they harvested by machine (which they wouldn't) and he went on to pick seperate tris at between 18 and 23° potential.

Thanks Charles. As you say it is also having the belief and confidence that it is possible.


We love you, as you know.
Doesn’t mean we always agree.
You pointed out – rightly so – on another blog I had failed to mention Chenin as one provider of great fizz.
As far as “sweet” wines – unfortified, that is – are concerned, I would certainly NOT have omitted it. It comes only second to riesling.
The answer to your question is OBVIOUS: great wine-making makes the difference; hard work, observation, selective picking, good sense and good taste.

I often collect grenache at over 1120 density, and I’m sure a lot of good growers in Mosel, Franconia, Rhine Palatinate, in Alsace, in the whole of the Loire area and at many other places (Austria, Cima Corgo, Andalusia, Sicily, Setúbal, Cyprus, Tunisia ... you name it) do the same. Afterwards, it’s down to liking the stuff and doing what’s right. No added sugar needs to be involved.

My latest great stuff from your district was a “young” ¼ Chaume by Claude Papin, 2002, not exactly the most illustrious of vintages, but truly outstanding.

Luc. Thanks 2002 may not be the richest vintage but the wines, especially the whites, have great balance.