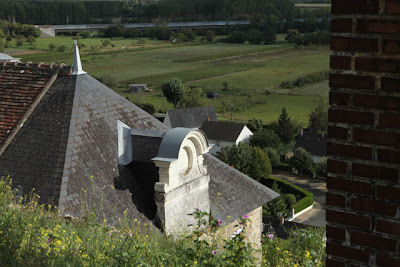 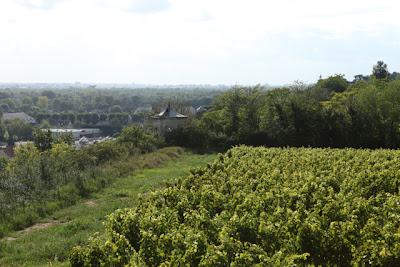 The view from Le Mont looking south west and towards Tours

Le Mont is one of the three vineyards that make up the 35 hectare estate – Le Clos du Bourg and Le Haut-Lieu are the other two. The first two photos show that Le Mont is right on the edge of the Première Côte with the ground falling very sharply away to the town of Vouvray below.The part shown in the second photo is above the Huet cellars, while the first has the viaduct that carries the TGV line over the River Cher. Gaston Huet, Noël's father-in-law and Mayor of Vouvray, successfully fought to have the line moved to the east and to pass through a tunnel rather than use a cutting as was originally envisaged.
Le Clos du Bourg is also right on the Première Côte but a little to the west of Le Mont – beyond the Rue de la Croix Buisée where the Huet and Foreau cellars are located. Le Haut-Lieu, although also on the Première Côte is more on the plateau, has a higher proportion of clay and is close to the top of la Croix Buisée near the junction with the Rue Charles Bordes.
Photos taken in the vineyard on 19th September 2011 during the vintage: 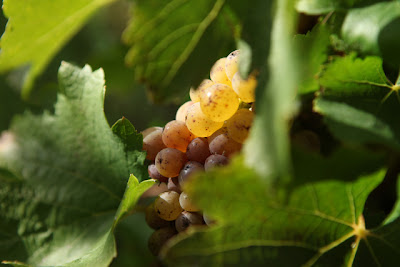 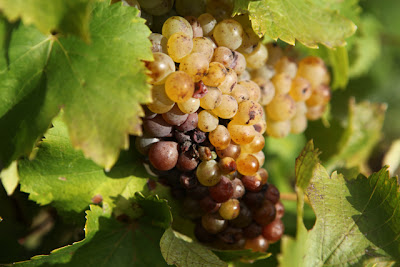 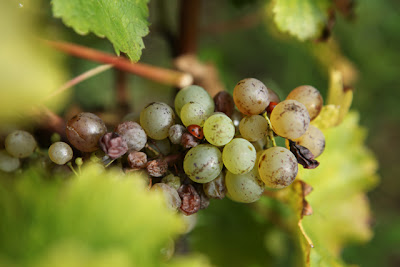 A small bunch that includes a couple of ladybirds 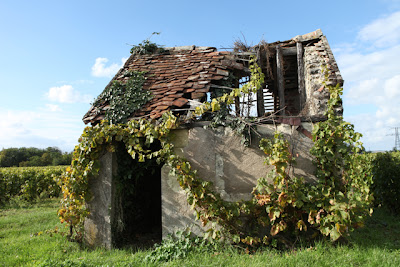 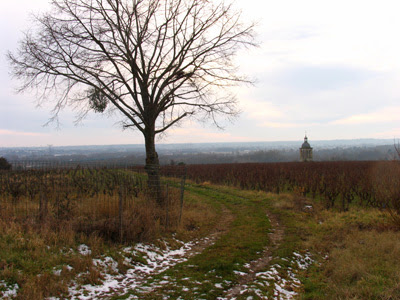 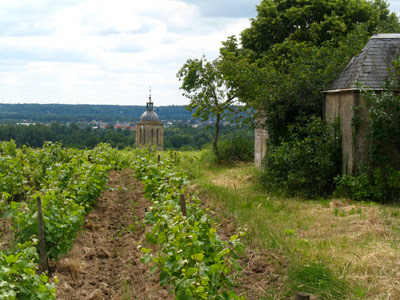 Jim, I’m very glad you allude to CLAY as part of Vouvray’s specificity as well.
Most people believe – and will tell you so with undoubted authority - this vineyard to rely entirely to “tuffeau” (chalk), partly because a lot of wine cellars have been excavated out of that material. At Huet’s, I believe the Clos du Bourg to be the most related to chalky soils, whereas the others are rather clayish parts. Correct me if I’m wrong. As you mention, although it is difficult to find the right spot to take pictures actually SHOWING the slopes, most of the estate occupies rather steep hills above the village.
At Foreau’s (Clos Naudin), unmistakably the other “star” in Vouvray, the vineyard tends to occupy more of a plateau, but the emphasis is also put on the “perruches”, that superficial – as opposed to the chalk basis underneath – mixture of sand, clay and flintstones.
You know I’m a fan of your snapshots, so, please, do us a favour. Next time you are in Vouvray, go up there and find a place showing the slope in its real steepness. THAT is probably one of the most determining factors for making great sweet wines.
And, by the way, can one actually hire your “loge de vigne” (Casot here in the Roussillon) for a short holliday?

Thanks Luc. Next time I'm in Vouvray I will try to take some snaps that show the steepness of the slope from the edge of the vineyards down to the river plain. But the vineyards themselves are not especially steep as they start at the top of the river cliff. Possibly in the Mosel they would have planted on the cliff itself!

Will try to find out the price of the loge de luxe for you.

Jim, there the slope is gentle indeed, and so are you. Thank you.
Your contribution made me thirsty the other day and I opened a bottle of Philippe Foreau’s moelleux Réserve 1989 on the spot .... for Christine, of course. We almost finished it, just the two of us, which means it was lusciously delicious. But she developped a bad headache ... needless to say.

Yes Luc – but with modération you would have sealed up the bottle put it in the fridge and enjoyed a few glasses the next day clear headed! But too delicious!

I recognize your wisdom, as opposed to my wicked “tempestuosity” – a neologism.
But the next day, still under the impression of your note, we had a bottle of Clos Baglin 1990 (Vigneau-Chevreau). And today, I’m heading for one of my few remaining old “ La Guimonière VV”. How do you want me to find a way out, with all those jolly good flagons in desperate need of emptying, lest they would turn sour ?
We are almost through pruning (less than one ha left) and I spend most of my time trying to catch up with my paperwork – not my strongest feature. Christine abandonned her retail shop in Perpignan (not worth the time and the overheads), which I helped emptying. So you see, I sit all day at my desk and crave for some entertainment. That’s why I post nasty notes - or sometimes friendly ones – on the blogs of my pals and .... sip, sip, sip.
Moderaçion is admitted to hospital, with a nervous breakdown, gastric ulcer, headache and bad breath. It will teach her a lesson: “Sapias, vina liques ....”