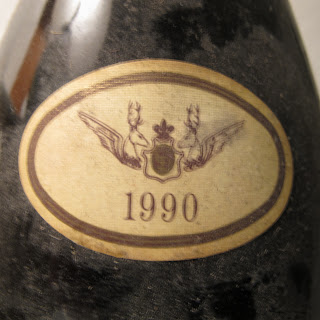 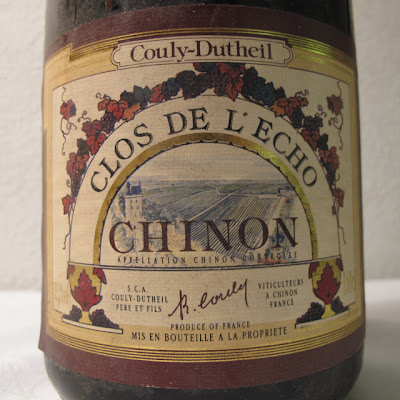 Last night at the RSJ Restaurant there was a dinner and tasting of Chinons stretching from 2009 back to 1990. 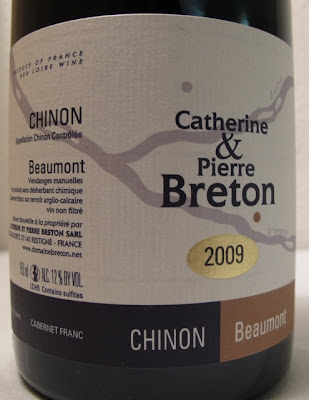 From vineyards on the undulating clay and limestone slopes around Beaumont-en-Vèron. This had considerably more weight than the Perrière – partly due to the different terroir but also from doubtless lower yields. With black fruits and spice, soft tannin, the Beaumont is drinking well now but can be kept for a good five years. I have been critical of some of the Breton wines but this 2009 was showing well.

These two wines were served with a balontine of foie gras & confit of duck with fruit chutney. 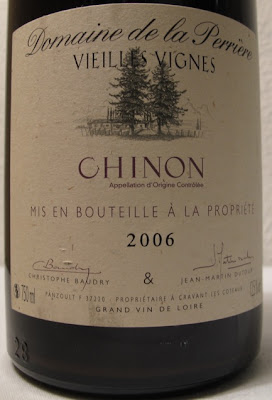 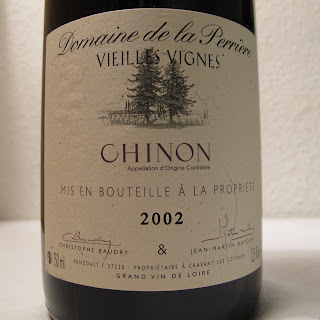 Then onto two vintages of Baudry-Dutour's Vieilles Vignes
2006 Vieilles Vignes Domaine de la Perrière, Baudry-Dutour
2002 Vieilles Vignes Domaine de la Perrière, Christophe and Jean Baudry
These, which come from gravel vineyards, showed the importance of vintage in the Loire. The 2006 being fuller and richer with plum and liquorice flavours reflecting the good summer of 2006, which was potentially a very good vintage until the rain and the onset of rot at vintage time meant that the grapes had to be hurriedly gathered in. However, there are some very good 2006s, if not quite at the level of 2005.
2002 was one of those Loire years when September and October saved the vintage after a poor summer. Sunshine and an easterly wind allowed the grapes to ripe and the drying conditions concentrated the grape juice. Less concentrated than 2006 and more in the red fruit spectrum with more present acidity. Like many 2002s it has lovely balance.
Both cuvées are aged in barrique. The 2002 was made before the creation of Baudry-Dutour in 2003. 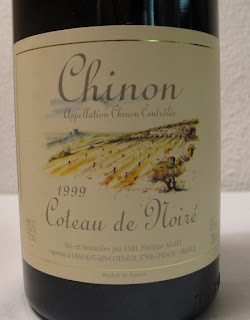 1999 Coteau de Noire
Next up two wines from Philippe and Claude Alliet. Philippe is a cousin of Christophe Baudry and he set up his domaine in 1985 and is widely acknowledged as one of the top Chinon producers. 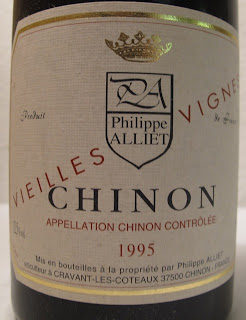 The Alliets acquired the Coteau de Noire in the early 1990s. On the steep limestone coteau a little to the east of the town of Chinon, the 1999 comes from vines of less than 10 years old and is all the more impressive for this. Elegant concentration, structure and length, this is another example of how well the rather unregarded 1999 vintage is now showing.


Without food the 1995 Vieilles Vignes (from vines on gravel) shows some of the angularity that has been typical of this vintage with present tannins and acidity. With food the sweet, evolved fruit comes through.
1990 Clos de L'Echo, Couly-Dutheil (in magnum)

When this was first opened we were rather concerned that this might be past it, initially light and quite bricky in colour this developed in glass with attractive and charming sweet fruit with a touch of rather grainy tannins. Given that the storage conditions for these two magnums of Clos de l'Echo had not been the best, they were showing pretty well. Doubtless any examples of the 1990 stored at Couly-Dutheil's cellars in Chinon would be more youthful.
Served with braised veal, mashed potatoes, carrots, spinach, red wine jus. 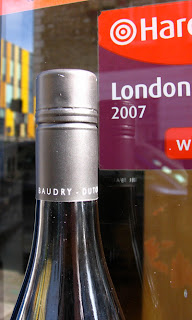 B-D's Chinon Blanc is closed with a screwcap
2009 Chinon Blanc Baudry-Dutour
We created some controversey at the end of the evening by deciding to serve this with the cheese – a Brie de Meaux. Tasted blind few people I fancy would pick this out as Chenin Blanc – many would opt for Sauvignon Blanc with its zippy, grassy, citric fruit although in the finish it does have that characteristic touch of bitterness typical of many Chenins.

Along with a number of the assembled company I thought it went well with the cheese bringing out the wine's fruit, while others thought that it didn't work at all and were rather aghast at the idea of serving white wine with cheese.

Rather aghast - good grief, it's a wonder you weren't hung, drawn and quartered !!

Fortunately those attending the tastings at RSJ are required to sign an undertaking that they will desist from punishing the presenter capitally during the course of the evening!