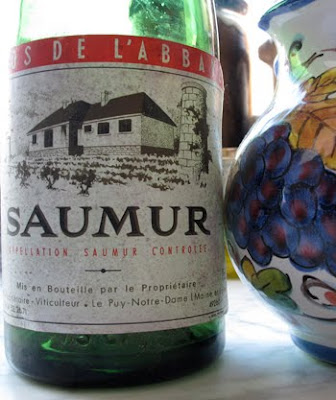 Here is proof, if it were needed, that dry Loire Chenin Blanc ages wonderfully well. Although it is unlikely to last as long as the sweet wines, well made wines can last decades. On Sunday I opened this 1964 Saumur from the late Henri Aupy's Clos de l'Abbaye on the northern edge of Le Puy Notre Dame. Henri Aupy established the domaine in 1962. His 1964 is now mid-gold with a touch of aged maderisation along with dry honey on the nose. This touch of maderisation adds extra complexity to this still quite austere wine preserved by its backbone of vibrant acidity. No reason to doubt that this 1964 will last at least another decade or two. The weak point is likely to prove to be the cork. 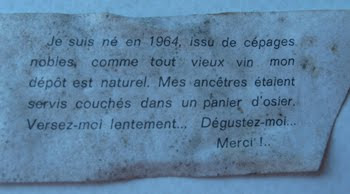 I was born in 1964 ....
The domaine is now run by Henri's son, Jean-François. I visited the domaine on at least a couple of occasions during the 1990s but haven't been back for years. Not a criticism of the wines but a question of time. I must try and go back.

Henri Aupy was one of the architects of the recently recognised (October 2009) AC Saumur Le Puy Notre Dame, which is for red wines only. Aupy started the campaign in 1975. Whether he envisaged that the new appellation would cover not just Le Puy Notre Dame but 16 other communes as well is another matter.

« The weak point is likely to be the cork .... » How right you are, Jim. I cannot help but dream of what this wine would be like had it been bottled with a screwcap and the lower sulfite that goes with it as an added bonus.