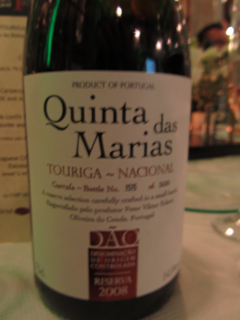 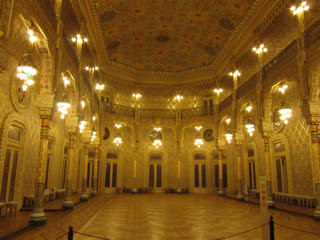 Palacio da Bolsa: the arabesque room
During the gala dinner last night at the magnificent Palacio da Bolsa we tasted a number of Touriga Nacionals including some of those selected as the top 12. It has to be said that a number were disappointing – some over-extracted and a little hot with alcohol. My favourite was the 2008 Quinta das Marias. It also seemed to be the table's favourite as the bottle level was the lowest of all the assembled bottles of Touriga.
Tasting these Tourigas reinforced my growing feeling that Touriga tends to be better as part of a blend rather than as a single variety.  A number of the wines seemed incomplete needing one or two more varieties to soften it out and to add further complexity. This was confirmed this morning by Rui Reguinga, one of the speakers at the Touriga Nacional grape variety session. Dão, the home of Touriga Nacional, seems to be the only place where Reguinea and Luis Lopes, also on the panel, feel that 100% Touriga is a success. 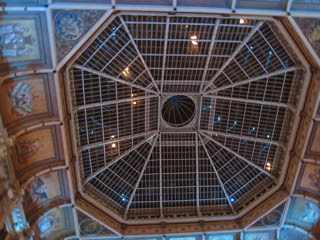 Roof of the dining area 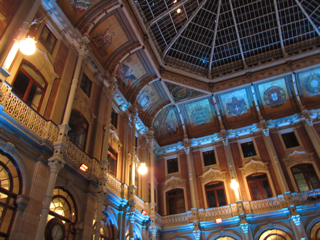 Walls and roof of dining area 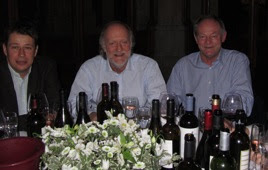 Dear Jim, I’m puzzled at not finding Quinta das Roques’ TN as part of the twelve favorites you had the opportunity to taste, as it is such a regular top-scorer (I’m 101points on that!).
Luís Lourenço (an ex-teacher) succeeds almost every year into taking his Touriga (in its Reserva version) to the very top of what Dão is able to produce. By and large, I share your view about TN being very much a variety for blending – as it is so powerful. But his is always a thrill to drink, a pleasure to finish and a pain to have to leave! The very same Luís makes the wines of Quinta das Maias - not Marias, another quality estate – (meaning “broom”), situated in the natural park flanking the Serra da Estrela, equally commendable. You’re lucky to swallow all these goodies in the magnificent halls of Porto’s old Stock Exchange. I love the place and envy you so much. Enjoy!

Luc. As you will have gathered I wasn't involved in the selection. Also I have no idea what wines were entered for the panel to taste.

Some of those TNs selected are I'm afraid far from impressive. Although at the tasting of the Top 12 this afternoon the Quinta das Marias was again my best wine. Followed by Munda also from the Dão.

I too think that TN is best suited for a blend. The 100% wines have not been the best in my opinion.
My choice has been limited though.

I am with you on the Touriga Nacional is probably better as a part of a blend. That ability to blend their native grapes, I think, is Portugal's great strength as a wine making country.

Just a point - the wines that were shown at the gala dinner, which I also attended - were, I believe, a selection of all the wines that entered the competition, not just the winners. Two of the bottles on my table, which fit your description of being over-extracted and high in alcohol, certainly were not in the top twelve. On the other point in your previous blog about price being the most important consideration when a Brit buys a wine, even before colour is decided upon, this surely must be true. I wonder how the question was framed? I am buying a new television for the house this Christmas and price is more important than a pin sharp image, or the size. In other words you decide on your budget first, then you select the best possible option within the budget. The findings are not so depressing if one considers this.
I did a little blog about the conference too, if I may link to it here? http://www.oakleywineagencies.co.uk/news-blog/

Thanks Nick. I was aware that not all the bottles available at the gala dinner were the winning wines. However, I thought there were some poor wines amongst the 12 selected. The Pedra Cancela, in particular, I found overextracted and tannic.