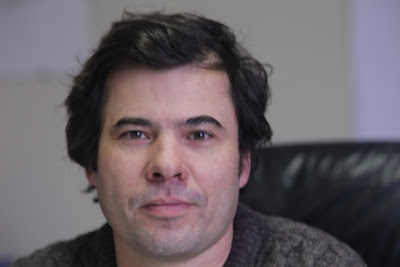 After the truffle market it was off to Panzoult and Baudry-Dutour to taste 2010s with Jean-Martin Dutour and Sylvine Teston, their export-director. Pity it was such a miserable wet day as the drive would have been very interesting through attractive countryside and passing by Luzé, the site of the Abbaye Royale de Bois-Aubry. Clearly we will have to return on a better day and when we don't have a tight schedule. 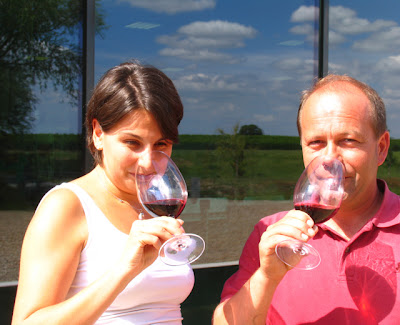 Sylvine Teston and Christophe Baudry
At Baudry-Dutour we started by tasting some of their range of 2010s from tank. Mid-weight Domaine de la Roncée has soft, blackberry fruit and will be bottled early – a wine to enjoy the young fruit rather than analyse. Naturally Roncée's Clos des Marronniers has more concentration and depth. The 2010 Château de Saint Louans, just to the west of the town of Chinon, is very concentrated and looks promising, although it will not be released until 2012 after an élévage in barrel. I didn't taste the 2010 Les Perrières and the Château de la Grille as these wines are made at the respective properties.

Jean-Martin thinks that at the top end the 2010 reds may well be better than the 2009s because yields were down by 20% in 2010 – 40 hl/ha compared to 50 hl/ha the previous year.
I also tasted the opulent and powerful 2010 Chinon Blanc from Saint-Louans in new barriques. Although 15.7% alcohol and completely dry, the wine is well balanced. Will be interesting to taste the finished wine. The well balanced 2009 Saint-Louans (15€), which is now in bottle, has a touch of spicy wood with rich fruit. Bottled on 10th December this really needs another six months to a year for the barrel spice and the wine to harmonise.

We then tasted some 2009s bottled reds starting with the easy drinking Domaine de la Perrières (5.50€) with its juicy, red fruit flavours. The delicious 2009 Domaine de la Roncée (6-7€) has some more concentration, structure and is attractively round. We tried it last night with a turkey and ham pie (the season of left-overs!), which worked well, and then the remmants with a little foie gras – surprisingly good – and some paté en croute. Certainly as they are showing at the moment the additional euro or so for the Roncée is well worth it.
Posted by Jim's Loire at 00:14