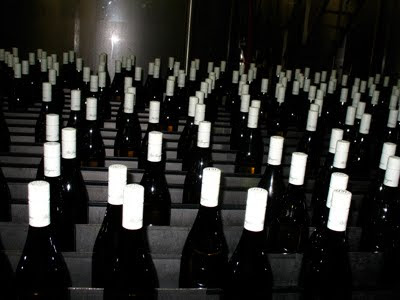 A rare sight in Sancerre: screwcap bottling line@Domaine Henri Bourgeois
At the offices of Decanter magazine today for a tasting of 2009 white Sancerres. Out of 81 wines we tasted on the first of two days – eight tasters tasting 40 wines each – only 5 or 6 were closed with a screwcap. Dr. Damian Martin of the Wine growers of Ara, who happened to be visiting Decanter's offices that day was surprised at how few there were. In a tasting of New Zealand Sauvignon Blancs all, with possibly a rare exception, would have been screwcapped. In France the on-trade's resistance to scewcaps has so far proved a decisive block on their use.
We had a few corked wines today and, at home, we certainly had a corked bottle of 2000 Cabernet, Clos Roche Blanche. Initially it seemed just rather disappointing and rather past it but as the air got to it the malodorous cork came out in its full splendour and the wine went down the sink.
Tomorrow we have about another 60 Sancerres to taste – 30 each.
Posted by Jim's Loire at 21:28