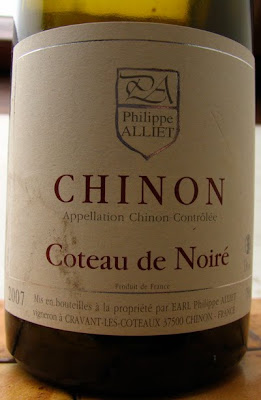 2007 Coteau de Noire, Philippe Alliet
A very enjoyable lunch last week with Jean-Ernest and Liliane Sauvion at their lovely Western Touraine retreat, we drank a quarto of Chinons – one from 2007 and three from the 2005 vintage. A very enjoyable bottle of Château de Targe, Saumur Mousseux (70% de Chenin Blanc, 30% de Cabernet Franc) as an apéritif to prepare our palates.
We tried them blind. First up was the dense, powerful and well structured 2005 Vieilles Vignes from Philippe Brocourt in Rivière on the south side of the Vienne. I guessed that this was either 2005 or 2006 and said that I like the concentration but that it needed more time. Brocourt is not a producer I know and we were impressed, especially as it costs around 7 or 8€. 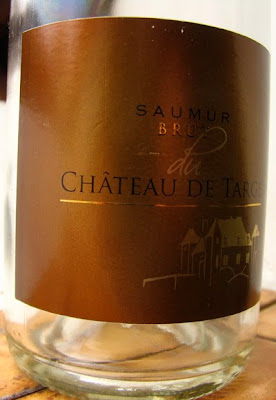 Saumur Mousseux, Château de Targe
The second Chinon was both lighter in colour, less structured, softer and more ready to drink. I guessed wrongly that it was older. I should have thought that it might be a 2007, which indeed it was – the Coteau de Noire of Philippe and Claude Alliet. Although it was well made its price tag of some 20€ made it less good value than the preceding Brocourt. Admittedly, however, we are not comparing the same vintage and the cost of production is at least the same, if not more, in a difficult year like 2007. Furthermore Philippe Alliet has a deservedly high reputation built up over a number of years, so can fairly charge a relatively high price for his Chinon.
The third Chinon – 2005 L'Angelot, Domaine de Beauséjour from Gérard and David Chauveau in Panzoult – was our least admired wine of the four. Less concentrated than the Brocourt with more acidity and some dryish tannin, it was also the most rustic of the Chinons.
We finished with a very recognisable flange bottle – could only be a Couly-Dutheil. I guessed 2003 Clos de l'Echo because of the rich, concentrated, soft but slightly cooked fruit with some granular tannins in the finish. In fact it was the 2005 Clos de l'Olive.
Posted by Jim's Loire at 16:11

Good to hear that you had seen Jean-Ernest and Liliane. Now that they are 'retired', it's left some what of a void in our wine-buying lives. Quite delightful people...

By the way, have you tried the Chinons of another Philippe (Pichard)- Domaine la Chapelle - based in Cravant? Very good wines these days with a lot of 'terroir' showng through.

Jean-Ernest and Liliane are both well. Will look out for Philippe Pichard's Chinons as I cannot remember tasting them.