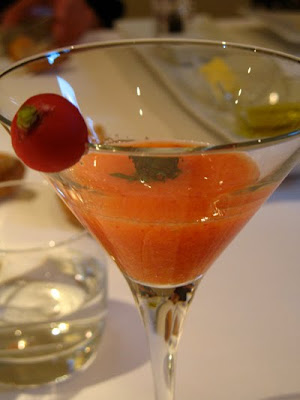 Martini cocktail – part of the radis dish (below) 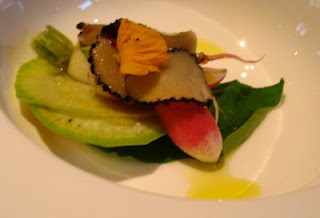 Last night was the first opportunity we had had to eat at Le Lièvre Gourmand since it skipped from the south of the Loire at Vailly-sur-Souldre to just onto the north side of the river on the Quai Chatelet in Orléans. 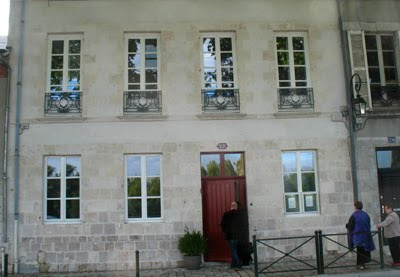 "I suppose this must be it!" The very discreet Le Lièvre Gourmand
I'm delighted to report that nothing has been lost in the move – William Page's cooking remains as delicious and inventive as before. You choose three (45€) or four courses (55€) from seven choices plus dessert or cheese. Last night's were: Radis, Tourteau, Morue, Bar, Poulet Fermier, Lapin and Ris de Veau. 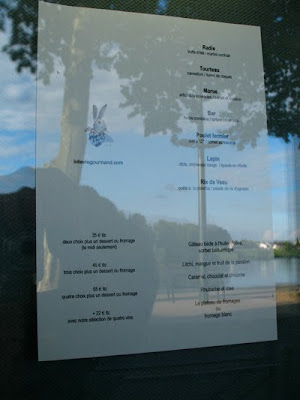 La carte
My two stand out dishes were the radis with truffe d'été and martini cocktail and the ris de veau poêlé à la plancha with a salade de ris d'agneau. 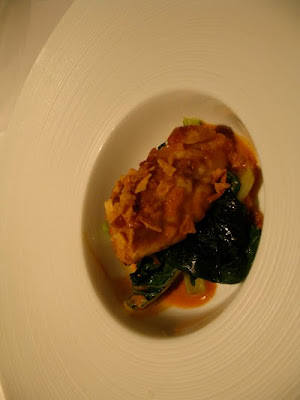 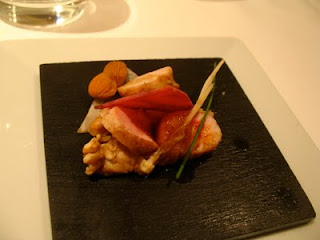 salade de ris d'agneau
To drink we had Henry Natter's 2007 François de la Grange, Sancerre as our aperitif  – good balance of fruit and crisp acidity. Then the rich and complex 1997 Clos Saint-Yves, Savennières, Domaine des Baumard which was an excellent match with out various first two dishes of crab, morue and sea bass. Then we moved to Australia – William Page was born in Papua New Guinea – for the 2003 Fotobolt Shiraz from d'Arenberg and the 2003 Cabernet Sauvignon, Clare Valley from Tim Adams.
One word of warning – apart from the discreet menu in the window there is nothing to indicate that No 28 Quai Chatelet is a restaurant, so make a note of the house number before you set off.
We stayed at the very comfortable, reasonably priced and central Hotel Marguerite about a five minute walk from the restaurant. 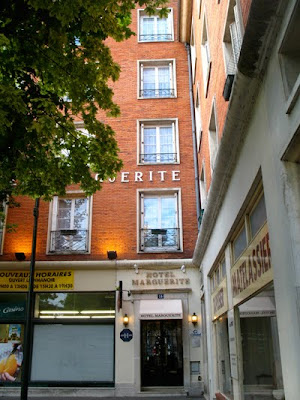 Have been looking for an Orléans dinner option for a while so thanks for this. It's also open 7x7 so a rare Sunday evening option.

Had a splendid dinner on Sunday night (22nd August) - thanks for the tip. The truffles were puréed with lentils and made a divine second plat. Stuffed quail was prepared perfectly. The cheese board irresistible and well above average and bargain at 5 euro.
Just about got used to the plain decor. There seemed to be more lounge area seating than dining places.
On the wine front a sensible short list, but was very surprised not to find a Cabernet Franc.
Many thanks for the tip off.