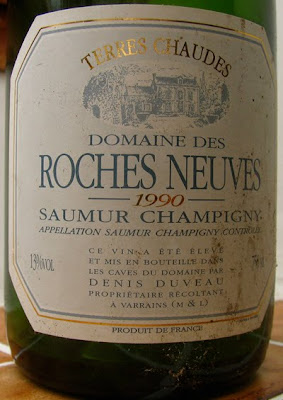 On Monday night we had a very interesting comparison between two Saumur-Champignys from the same property but with different owners. I bought half a dozen or so of the 1990 Terres Chaudes at Majestic Wine Warehouses in the UK sometime in the early 1990s I guess. I can't remember what I paid for them – not very much I suspect.

1990 was the last vintage made by Denis Duveau before he sold the estate to Thierry Germain in 1991 – the year of the severe April frost and not the best time to start a new venture. Still Thierry has survived and prospered.

The second bottle was 1995 Le Marginale. This was a new cuvée that Thierry introduced with malo en barrique and I think the 1995 would have see a fair proportion of new wood. 1995 may well have been the first vintage of Marginale. I must check up on my notes of a vertical of Marginale from late january 2009.

We drank the two bottles with a very good joint of beef from the CocciMarket in Francueil – this well stocked shop includes a very good butcher's section. I decided to serve the 1990 first. It was delicious with lovely, soft ripe evolved fruit and very silky tannins – overall beautifully balanced. Not a heavyweight but with lots of finesse and typical of the seductive 1990 vintage. Still quite youthful in colour, I don't think this will get any better but also should continue to be enjoyable over the next few years.

1995 Marginale was a much bigger, more structured, butch wine. Also showing well but without the seductive charm of the 1990 Terres Chaudes. Equally representative of its vintage that had high levels of tannin and acidity. 1995 Loire reds have taken a considerable time to come round. I suspect that this Marginale is now around its peak

I visited Denis Duveau regularly and really miss his 1989 medal winning Champagne now that the last bottle has been drunk. It was a very special smooth and flavourful wine. He told me he had decided to sell up because the controlling wine area would not let him produce any white wine on what they recognised as Saviour Champigny appellation ground. After proving his ability with his Red wine he was keen to try making some white. Following on from a very poor year for vintners he talked about selling up and possibly moving to Chile.

I have lost touch with him and would appreciate if anyone can tell me if he is still in France or in Chile.

Thanks for your comment. Denis did to some work in Chile but also did some consultancy in the Saumur-Chinon area. I haven't seen Denis for a number of years now, so I don't know what has happened to him

I am surprised by Denis saying he couldn't make white wine in Saumur-Champigny. You can make Saumur Blanc throughout the Saumur Champigny zone and many producers do. Before the success of SC there was more white made here than there is now.