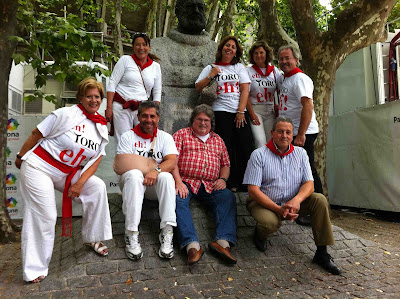 Pancho Campo MW, Jay Miller and staff of The Wine Academy of Spain
The following statement has been posted by Robert Parker on his bulletin board today:
'We have taken the accusations very seriously since this story broke. Below is a statement from eRP.com's lawyer Steve Haas,esq. about our investigation. When the final report is in, we intend to be totally transparent and publish it fully on this Board. Our lawyers are interviewing Pancho Camp today, and all relevant contracts and emails have been translated into English and reviewed.
I remain appalled at the lynch mob rush to judgment by the blogging community, but there have been several very well-balanced blog accounts devoid of the loathing and clownish tabloid-like comments. I refer to Tom Wark's excellent blog Fermentation (http://fermentation.typepad.com) and Steve Heimoff's blog accounts (http://steveheimoff.com). By the way, Jay is still working for TWA until January 1, because we believe he has done nothing to compromise the independence of our reviews, and based on the information we have already acquired, Jay clearly and irrefutably has taken no money for a wine review or winery visit, but I will await the lawyer's final report. Moreover, his retirement has been in the works since January of 2011, as David indicated. Obviously I knew for two months, as did Jay and the Wine Advocate staff, that the announcement was scheduled for December 5, and we had no reason to postpone it.'
The following is from Steve Haas, Esq:
'In light of allegations and innuendos posted by various internet blogs concerning visits made to Murcia, Spain by Jay Miller, an independent contractor who has conducted tastings on behalf of The Wine Advocate for more than 5 years in addition to his own wine related endeavors, and the participation by The Spanish Wine Academy in such visits, The Wine Advocate has engaged the law firm of Cozen O’Connor to conduct an investigation to determine whether our strict policy of independence in the review and tasting of wines for publication in The Wine Advocate or posting on www.eRobertparker.com was compromised by any conduct of The Wine Advocate or any other party associated with tastings in that region. Rather than reaching premature conclusions and making statements based upon snippets of emails and an excerpts of documents without the benefit of all available facts, we have placed no limitation on Cozen O’Connor’s efforts to seek information from whatever sources whom they identify as appropriate for a thorough investigation. This undertaking is merely a continuation of our efforts to guard our independence and integrity with vigilance for the benefit of our readers and subscribers.

We would also reiterate that Jay Miller’s decision to step down from his activities on behalf of The Wine Advocate is the result of long standing discussions between The Wine Advocate and Mr. Miller concerning Mr. Miller’s desire for sometime to pursue his own endeavors. Despite the dogged efforts of others, without any substantiation, to try to connect the timing of the announcement of Mr. Miller’s departure, which had been in the works for several months, to the recent allegations being perpetrated by these same critics, his departure has absolutely nothing to do with these allegations. We thank Jay for his contribution and dedication to The Wine Advocate and continue to wish him good luck in his future endeavors.'
Parker's statement clarifies that Jay Miller will remain with The Wine Advocate until 1st January 2012.
Link to the law firm: Cozen O’Connor


Harold Heckle and I welcome the statements of Robert Parker and Steve Haas, eRP.com's lawyer. We are pleased to see that a thorough investigation by the law firm Cozen O’Connor is now underway. However, we are concerned that Steve Haas appears to have limited this investigation to the visit to Murcia.
Although an investigation into the arrangements for the visit to Murcia (24th-26th November) can certainly be thorough, its terms of reference appear to be too limited in scope. All of Jay Miller’s Spanish visits since Pancho Campo MW was entrusted with their organization in 2009 should be investigated.
This investigation should cover to what extent the visits before Fenavin in May 2011 were to regions and bodegas in which Campo and The Wine Academy of Spain had a commercial interest. Post-Fenavin 2011 the investigation should consider whether the ‘hybrid’ nature (a mix of a paid free-lance speaking engagement with an official visit to review the wines for The Wine Advocate/www.eRobertparker.com) for the visits to Navarra, Murcia and Valencia as well as the proposed visit to DO Vinos de Madrid breached ‘our strict policy of independence in the review and tasting of wines for publication in The Wine Advocate or posting on www.eRobertparker.com’ .

Mr Heimoff's comment is very lenient indeed re Mr Campo's doings.
Why can't he see that estates and regions which were not included in Miller's trips arranged by Campo had little chance to be tasted and thus commented by the Wine advocate, and this meant big money, or at least that's what the bodegas and regions were led to believe by Mr Campo.
And this is by no means the way Mr Parker says he wants the job done.

Gotta love that Miller has already been "clearly and irrefutably" proven clean -- before the investigation.

This seems like an extremely defensive and prickly response to the issues that have been raised. By claiming that the investigation is being launched because of "allegations and innuendos posted by various internet blogs," TWA is trying to simply make this a "bloggers vs. us" issue.

I am happy that an investigation is being launched, but would have thought the more appropriate statement would have read something like this:

We were recently made aware of a series of emails between Pancho Campo and certain wine organizations in Spain. Because of our dedication to our subscribers and our commitment to independence in our reviews, we have retained outside counsel to conduct an investigation of the matter even though at this time we have no information that there was any wrongdoing by any TWA employee. In order for this investigation to proceed unhindered, we will refrain from making any statement regarding this matter until the investigation is complete. At that time, we intend to release the full internal report.

Thanks for your comments. I hope The Wine Advocate will be fully transparent and that the report will published not behind pay walls but for all to see.

As already stated the investigation must not be limited to the arrangements for the visit to Murcia.

Parker is paying the bill. Thus he'll define the scope that he wishes (in every respect).

Interesting only in that it appears to open the way should he wish to disassociate himself from Campo.

Ian. Although it is true that RP and The Wine Advocate are paying the bill, if the investigation is to have validity and credibility it will need to take an overall view and not be limited to to examining a two day and a quarter day to Murcia.

Oh, damn, this may mean that I will have to delete such loathing and clownish posts as this one: According to Recently "Retired" Spanish wine critic Jay Miller of Robert M. Parker, Jr.'s The Wine Advocate, Great Wine Can Be Equated to Pornography http://www.gerrydawesspain.com/2011/12/whether-i-am-in-front-of-great-porno-or.html

I am going to do that, right after I consult with my pro-bono lawyer, er barrister. (Is this blog still in England?)

Mr. Parker does realize that there are some fine wine loving barristers out there who are not necessarily enamored of his palate and relish the idea of getting involved with a wine case that is going to be one for the history books.

This is going to be Winegate, not Watergate (no reference to the Wine Academy of Spain's official address in Florida intended), and gosh it could end up on the evening news, on Jon Stewart, on 60 Minutes. Wow, Jim, you and I and a couple of others could end up being able to do our loathing and clownish act on television. I see a multi-season hit series coming up!

Jim, written neither by the loathing nor clownish, this article is an eye-opener that gives some special insights into Jay Miller and Pancho Campo. I have included the English translation of the entire article, whose publication was approved by elmundovino.es: