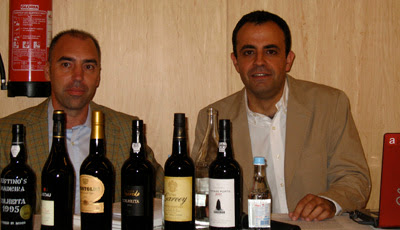 Esteban Cabezas (right)@ The 2nd European Wine Bloggers Conference in Lisbon October 2009
Campo was unable to be present as the Interpol wanted notice prevented him leaving Spain
This is a translation of an article by Antonio Casado that first appeared on elmundodelvino.com on 11th December. I'm very grateful to Victor de la Serna for permission to republish. The article was translated from the Spanish by Gerry Dawes with some polishing by Victor.
EL TESTIMONIO DE UN PERIODISTA DEL VINO
Campo-Miller, un recuerdo personal

I wish someone would explain to Miller in just what position Pancho has put him (that of a consultant demanding 20,000 € per day) in documents written in Spanish. I'm sure that when Jay finds out, on the unemployment line, it will not to make him at all happy. And perhaps our plump American taster even has friends with Interpol."
Posted by Jim's Loire at 17:20

Thanks Anon. Duly noted and have put up links to Jay Miler's article. Jim