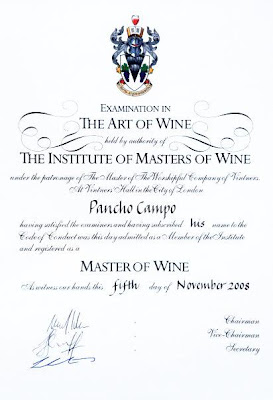 
There have been a number of questions posed and comments made on Facebook, Jim's Loire and elsewhere questioning whether Pancho Campo MW has breached the Institute of Masters of Wine Code of Conduct.

For information here is the IMW Code of Conduct and the declaration all successful candidates sare required to sign on admission to The Institute of Masters of Wine. I have taken this from the 'Introduction to The Masters of Wine Education Programme 2010-2011'. This can be freely downloaded from the net.
The Code of Conduct is on pages 28 and 29 of the above document and The Declaration on Admission on pages 29 and 30.

3.1 General ­ Members must recognise the importance of maintaining and enhancing the reputation of wine and the wine trade in general, and the Institute in particular.  It is a basic requirement that members will ensure so far as lies in their power that they and any organisation of which they are part will observe all relevant laws and regulations in both letter and spirit.
3.2  Sales and promotion ­ Members engaged in sales, promotion, advertising and writing about wine professionally should be careful always to describe the subject truthfully and with good sense, neither claiming virtues or prospects that do not exist or cannot be justified nor unreasonably exaggerating merit.  Individual and group endorsements of advertised products by members of the Institute must be viewed in the same light.
3.3 Purchasing ­ Members involved in purchasing should at all times endeavour to buy honest and sound quality. They should not condone the marketing of any such quality as might damage public respect for and interest in wine.
3.4 Wine­making ­ Members involved in production of grapes or making of wine should not knowingly engage in any practice or technique (whether or not such practice or technique shall infringe regulations relating to the production of wine) the practice of which by a member may tend to bring the Institute into disrepute.
3.5 General commercial probity ­ Members involved in commerce are expected to maintain the highest standards of dealing, in particular in relation to dealings through limited liability companies, and not knowingly engage in any enterprise or commercial practice which would be regarded as unacceptable by the majority of members of the Institute, whether or not such practice may comply with local laws where it is carried out.
3.6 Personal ­ Members are expected to be sensitive to the social and behavioural problems associated with the immoderate consumption of wine. Members must ensure that they do not engage in inappropriate behaviour which would reflect badly on the Institute.
3.7 Members are required to preserve the good name of the Institute at all times and refrain from any public statements detrimental to the Institute or (in relation to statements concerning another member or members) which tend to bring the Institute into disrepute.
3.8 Responsibility for others ­ Members must in principle accept that they will be regarded by the Institute as answerable for the commercial conduct of any
person acting on their instructions.
**
5.0 The Declaration on Admission
5.1 Before admission as a member of the Institute, candidates for admission will be required to sign a declaration.  The original of this declaration, of which the following is the text, remains with the Institute.
Declaration on Admission
I. I confirm that I have read and understand the Code of Conduct of  Members of the Institute of Masters of Wine.
II. As a condition of my admission into the Institute, I therefore acknowledge and confirm my obligation to conduct myself in all matters relating to wine and the wine trade in accordance with such Code.
III. I accept that should the Council of the Institute after due investigation determine my conduct at any time to be in breach of the Institute's Code of Conduct, the Council may take steps to terminate my membership of the Institute, remove my name from the Register of Masters of Wine and thus withdraw my right to use that designation, or its abbreviated form M.W.
Signed..............................................  Dated ..................
Name in Capitals  .............................................
Posted by Jim's Loire at 15:12

Email ThisBlogThis!Share to TwitterShare to FacebookShare to Pinterest
Labels: Code of Conduct, Institute of Masters of Wine, Pancho Campo MW

Unfortunately looking through this, there really isn't anything specific to justify taking away Senor Campo's MW.

Not sure. This clause may indicate something:

"...not knowingly engage in any enterprise or commercial practice which would be regarded as unacceptable by the majority of members of the Institute, whether or not such practice may comply with local laws where it is carried out"

I'm not sure if the majority of the Institute would feel that extorting smaller, less wealthy and known Spanish producers for promises of good (and possibly inflated) scores and write-ups would be considered 'acceptable'. Seems unlikely. He makes a farce of the institute. Though he has created some interesting, highly rated and provocative wine events, his negative publicity is very damaging to the Institute as a whole.

I'm with dids - the wording is vague enough that the IMW would be very brave to consider action over any of the wine stuff.

Arguably being on Interpol's wanted list could have been enough, but that appears to no longer be true.

Essentially the prestigious MW title has been belittled by the behavior of Pancho Campo MW. Certainly people who carry this title will be taken a lot less seriously due to the circus of shame that this man carries around with him.

Talking loud and saying nothing, no substance, just hollow business speak to get rich quick with no care or regard for wine or the wine industry.

His business practices are shady by any measure. In the American field of law (okay, this isn't the legal world), "even the appearance of impropriety" (the ABA's words) is considered enough for disbarment. And getting you license to practice law would, by most peoples' measurement, be a whole lot more serious than getting your M.W. pulled. If they don't at least investigate this then they deserve to be mocked.

Gerry. I await your new DO Gonzo book – Fear & loathing in Marbella ... to be published by TWAS* Press!


* TWAS does that mean twas no more?

Jim, do you know if there is anyplace or anyone to go to buy myself an M.W. denomination of origin? I only need it for Spain, you see, so I am willy to take an MWSO designation (Master of Wine Spain Only).

I swear that I have never taken a University of California correspondence course nor have I attended a marketing seminar there, so that should be counted in my favor.

And though a member of the Campo camp tried to post an anonymous comment on my blog two years ago, claiming that my presence in Spain was no longer desired by wineries or by people in the wine trade, I can get two or three wine people in Spain to vouch for me (after several copitas) and deny that I have, as I was accused of, "bad taste and bad manners," at least not 100% of the time.

Any guidance you can give me will be greatly appreciated, because if I can get this designation, I can see that I should be able to go around Spain charging humongous amounts of dinero for doing "freelance" tastings with the various D.O.s.

Oh, damn, I have done that for more than 30 years now and they have not given me a Euro, except for a writing prize I won for an article, in competition with 50 Spanish writers. No wonder I am broke.

Forget it, this all sounds too clownish, not to mention loathing or loathsome or something!!

That book would be "Fear and Clownish Loathing in Marbella," and it will be "disgusting."

You are confused, Sr. Budd, let me give you a primer:

I know, loathing, loathsome and clownish. (Maybe RMP was referring to your shirts! ;-0)

Interesting to see some comments on other threads here.

I did not realise that PC´s father was jailed in 1983 for extortion in Barcelona, posing as ETA with his cousin. Sounds like this is why PC´s medical fees in Dominican Republic dried up.

The official attorney designated to represent our interest and to act in our behalf in a court of law is Mr. Luis del Castillo Aragón, member of the “Ilustrísimo Colegio de Abogados de Barcelona” (Barcelona Bar) Mr. Del Castillo can be contacted in his email ldelcastillo@icab.es.

It would seem Pancho is using the same well known criminal law firm that defended his father in Barcelona 1983.

Did they manage to get a good deal for his old boy when he sent death threats to prominent members of Barcelona society in the name of ETA to extort money and pay for his sons medical fees?

Anon. The arrest, trial and jail of Campo's father must have been a traumatic event for the young Pancho – then 22/23 years old. It may have been the reason that Campo did not finish his medical studies.