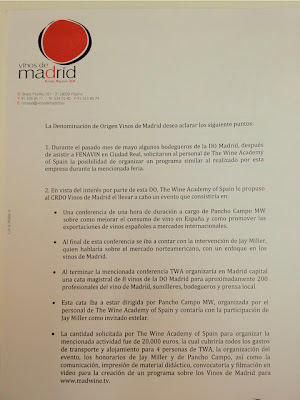 Page one of the Vinos de Madrid document 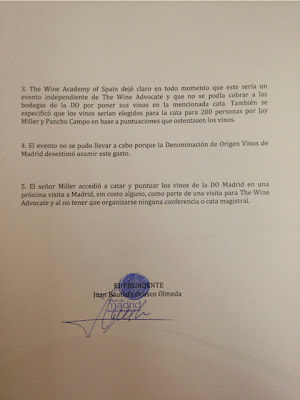 Page 2 signed by the President of DO Vinos de Madrid but no date or place of signing
Around 5pm on Tuesday 29th November bodegas in the DO Vinos de Madrid were contacted and told that Jay Miller would after all be tasting their wines. Samples were to be sent to the DO's offices as soon as possible as Miller would be tasting them on Thursday 1st December. Doubtless the producers were taken aback having turned down the opportunity earlier in the year to have a two-day Miller visit in a special cut-price €20,000 deal.
What might have caused this change of heart? Did Pancho Campo strike a deal with Juan Bautista Orusco Olmeda, El Presidente of DO Vinos de Madrid? This post features a signed but undated two page document from Vinos de Madrid with the president's signature on page two. There is also no indication where the signing took place. The document, written in the past tense, was clearly written by Campo bearing all the hallmarks of his style and only covers the organisation of the 'free-lance' part  ('independent of The Wine Advocate') of Miller's proposed visit to Madrid. It mentions an hour long marketing presentation by Campo followed by some remarks by Miller and then a masterclass with eight wines. It is stated that The Wine Academy will take care of the organisation of the seminar and masterclass. Adela Richer's email of June 4th 2011 had stipulated that DO Vinos de Madrid/the bodegas would be responsible for the organisation – venue, glasses etc.


'Mr. Miller has accepted to taste and rate the wines of DO Madrid in a forthcoming visit to Madrid, free of all charge, as part of a The Wine Advocate visit where he would not have to organize any conference or masterclass.'


This is completely at variance with the emails of 3rd June 2011 sent by Adela Richer and Campo. June proposal was for Miller to taste, assess and rate the wines of DO Vinos de Madrid.
Did Campo say to Olmeda sign this paper declaring that all our negotiations over a possible Jay Miller visit back in July were legitimate and I'll let Miller taste your wines on Thursday 1st December?
Although the document is undated it seems quite likely that an agreement between Campo and Orusco Olmeda was reached on 29th November 2011, hence the hurried instructions to send in their wines pronto. At 11am on 29th I had emailed Campo to advise him that further details of the proposed visit by Miller would shortly be posted on Jim's Loire. That post became No pay – No Jay.

The document says that the initial contact with DO Vinos de Madrid occurred during Fenavin, an annual Spanish wine trade fair held in Ciudad Real in May. On 12th May 2011 Jay Miller and Pancho Campo MW did a presentation of 13 wines from Castilla-La Mancha to over 250 people according to Campo's website. The tasting lasted 'over an hour'. Miller's fee is believed to have been $15,000. Apparently the original aim had been to get Robert Parker himself to do the event but this proved not to be possible. The Fenavin event appears to be an example of a tasting and speaking engagement which was quite separate from Miller's duties as reviewer of Spanish wines for The Wine Advocate. Thus no conflict of interest in Miller being paid a fee.
I suspect that Campo seeing the success of the Fenavin tasting wanted to replicate it again and again. The problem, of course, was that Miller's main job was reviewing Spanish wine, a big task and only part of his Wine Advocate portfolio, so having Miller doing 'free-lance' tasting appearances all over Spain just wasn't on. Equally Campo is smart enough to realise that a national fair like Fenavin was a special case. Local DOs certainly would shell out substantial sums just for a seminar and masterclass from Campo and Miller. Campo's solution was to produce a hybrid – tacking on a 'Fenavin' style 'free-lance' presentation onto an official visit by Miller to a region/DO. Miller in his official capacity as TWA reviewer was the bait and the cata magistral the cash cow.
It is, of course, this hybrid that has caused the recent scandal: the conflict of interest is abundantly clear. It must have been clear to Campo and once he knew Miller was leaving he would have been keen to assemble as many cata magistrals as possible.
It ought to have been clear to Miller but perhaps he went along with the scheme knowing he would soon be retiring from Team Parker and that, in the future, such lucrative 'free-lance speaking engagements' would be few and far between?
If the DOs were just paying for the 'free-lance' part, was The Wine Advocate picking up the tab for the 'official' portion of the visit? Certainly Campo has insisted that expenses arising from 'official' visits were paid by The Wine Advocate. What I wonder is the Spanish for having your cake and eating it?
**
Pancho Campo MW and The Wine Academy of Spain have released their long awaited statement here.
Posted by Jim's Loire at 12:26

The 'official' response from Campo's organisation.