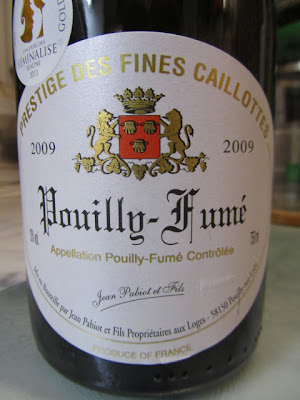 2009 Prestige des Fines Caillottes, Pouilly-Fumé, Jean Pabiot et Fils
The first weekend of December we went north to Derbyshire to spend a couple of days with old friends – Jane and John. He must have thought I was in the need of a few Loires, so John kindly dropped into the branch of Majestic in Derby and asked for suggestions. The assistant was delighted to oblige and came up with an interesting selection of six or more bottles.
We didn't have time to try them all but we did broach four of them. The stand-out wine was the excellent 2009 Prestige des Fines Caillottes Pouilly Fumé from Jean Pabiot et Fils. It has the weight of the 2009 vintage with complexity and lovely balance. Priced at £15.99 a bottle this is very reasonable for a top class Pouilly-Fumé.
In her new book – Earthy Delights from the Garden of France: the Kingdom of Sauvignon Blanc – on the Loire's Central Vineyards, Jacqueline Friedrich's rates Jean Pabiot et Fils* on a par with Domaine Didier Dagueneau. I'm not sure I would go quite that far but the wines from Jean Pabiot et fils, who are based in Les Loges just to the north of the town of Pouilly-sur-Loire, are consistently excellent and certainly much lighter on the pocket. 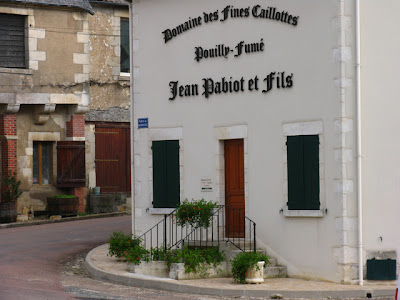 The premises of Jean Pabiot et fils in Les Loges, the road to the right runs up
through the hamlet to the vineyards above
Hope to cover the other three Loires from Majestic Wine shortly.


* Correction 19.12.11: My mistake I have confused the Pabiot's here. Jacqueline Friedrich rates Jonathan Pabiot highly. She has, in fact, no rating or mention for Jean Pabiot. My apologies I should have double checked.
Posted by Jim's Loire at 19:37

The normal cuvee 'Domaines des Fines Caillottes' is pretty good too and it's usually about £11 or £12 which is very good value.

Have you tried Jean's Sancerre? La Merisiere - also lovely but for me the Pouilly edges it.

I agree Tim the straight cuvée is certainly good and also excellent value. You can buy about two bottles of this wine for one bottle of the Ladoucette 'basic' cuvée. No contest!

Jacqueline. Thanks for pointing this out. I have put in a correction. Apologies.