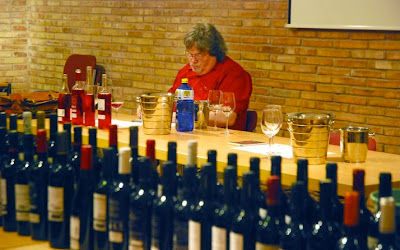 Jay Miller in Navarra: a 'free-lance speaking engagement'
or tasting, rating and assessing for The Wine Advocate? 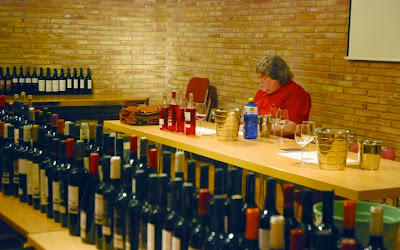 Following his reported comments in The Baltimore Sun, I emailed a few questions to Jay Miller on 9th December. To date I have received no reply. On Sunday (11th December) I sent him the two photos featured here asking whether they showed a free-lance engagement or an official tasting for The Wine Advocate. Fearing that the first email might have gone astray I copied the second email to the secretary at The Wine Advocate. To date no response – no acknowledgement.

I sent some questions to Miller on 2nd November – again no response or acknowledgment.
9th December 2011
Dear Jay Miller
A few questions if I may please.
a) In the Baltimore Sun article of 7th December it is reported:
‘Miller confirmed Wednesday that Campo helped him arrange free-lance speaking engagements, events where he would receive between $8,000 to $15,000. At the events, often attended by several hundred people, he would talk about his favorite wines, and attendees could sample those varieties.’
Is this correct please?
b) In the same article Pancho Campo MW explained that:
‘Campo said in that exchange he wasn't arranging a visit by Miller to any wineries, but rather that he was negotiating fees for Miller to host a seminar. The speaking engagement — not Miller's first — had nothing to do with The Wine Advocate, and the governing body for the local wine region, not any wineries, paid for it.
"It was not an official Wine Advocate trip, it's a freelance," Campo said. "When he does appearances on his own, those have nothing to do with The Wine Advocate."’
Over the past six months or so you have visited a number of regions in Spain including Jerez, Malaga, Murcia, Navarra and Valencia.
Which of these were ‘free-lance’ visits and which were official Wine Advocate trips?
c) Murcia and Valencia
Were you paid for the master classes you gave in Murcia and Valencia. If so what was your fee please? Was this fee agreed with Campo or the DOs/Asevin?
Was the tasting of 80 wines you did in the DO Valencia offices on Tuesday 29th November (09.00-13.00) for the Wine Advocate or was it free-lance?
d) Reports on your visits
The secretary of The Wine Advocate has confirmed that you will be writing up reports on your recent visits. These will appear on the erobertparker site but depending upon space may or may not appear in The Wine Advocate.
Were the DOs of Murcia and Valencia aware of this at the time of your visits in late November?
I would be happy to post unedited any further comments you would like to make on Jim’s Loire, subject to the comments not being defamatory or libelous.
I look forward to hearing from you.
Kind regards
Jim Budd