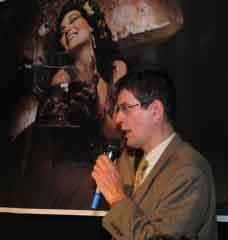 Hervé Lalau – a 'serious and professional' blogger?
Yesterday Hervé Lalau, one of my fellow bloggers in Les 5 du Vin, posted on his Chroniques Vineuse his thoughts on an interview Robert Parker had given to Suzanne Mustacich in Wine Business International. Published on 17th October this was one of the questions Suzanne asked:
'How do you see the role of the wine critic evolving in the future?
Today there is two schools of wine writing/criticism — 1) The paid professional who is usually independent and well-trained and 2) the bloggers who offer their opinions for free, and for the most part lack seriousness and professionalism.'
Read the whole interview here.
This is not the first time that Robert Parker has criticised wine bloggers for their lack of 'seriousness and professionalism'. This post by Joel Vincent on Joel's blog in April 2009 shows there is a history here:
Robert Parker should be ashamed of himself
http://blog.joelvincent.com/2009/04/robert-parker-should-be-ashamed-of-himself
It is a pity that Robert does not apply the high intellectual standards and rigour he demands of wine tasters and critics (
Posted by Jim's Loire at 11:59

Yes, that Mr Parker teaches us bloggers lessons on independence is very funny in the light of the Jumillagate...

Didn't Robert Parker begin as an unserious and unprofessional newsletter writer, going up against all the established wine writers in the field at the time? I see, I think. A blog is much different than a self-published, fledgling newsletter. One is paper, the other is on the web!