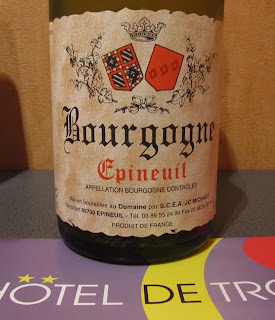 2005 Epineuil, Domaine JC Michaut
Overnight stop in Troyes on our way back from Varese. Had very enjoyable dinner at the Café de la Paix, 58 Avenue Général de Gaulle. We shared a dozen oysters then CRM had the mussels, while I had rognons de veau in a white Port sauce.
Looking at the wine list I was intrigued by the 1999 Carruades de Lafite 'Lafite de Rothschild' listed with no price but said to be 'bientôt disponible'. Perhaps this fine brasserie is also waiting for a delivery from 1855?

In the absence of the 1999 Carruades we drank a bottle of the 2005 Bourgogne Epineuil (red) from Domaine JC Michaut. This is one of the wines from the Yonne region – the reds being made from Pinot Noir. The 2005 was typically light in colour but had some weight and spice and was an agreeable easy drinking wine. There were also some Irancys on the list but we chose the Michaut as we had never drunk an Epineuil before and with a 2005 there was a chance that the Pinot Noir had ripened in this vintage.

The Café de la Paix was lively and friendly. We got chatting to a charming and very friendly retired French couple and it was interesting to hear their views on wines. Firstly that the local reds from the Yonne were too weak and acid. Proper Burgundy came from the Côte d'Or and needed at least 13% alcohol – the Epineuil was marked 12.5%. The Loire produces some attractive little wines – we didn't entirely agree here but didn't push it too hard! Beaujolais Nouveau was rubbish and that much of the ordinary Beaujolais vineyards would disappear leaving only the northern sector with the crus. South West France is now producing some good, strong wines.

They also said that there was a wine shop in Troyes where they could buy a range of wines from outside Europe, which were often good value. They had visited California and the Napa Valley and were impressed with the wines from there.
Posted by Jim's Loire at 08:10