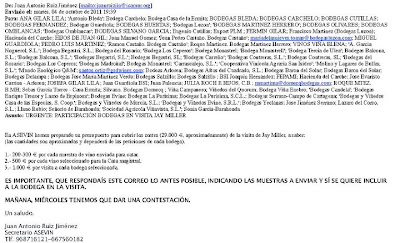 On the 26th October, a copy of this email sent on 4th October by Juan Antonio Ruiz Jiménez, the secretary of Asevin (Asocianción de Vinos de Jumila) to some 20 or 30 bodegas in the Murcia region was published here on Facebook by Vincent Pousson, who lives in Barcelona.
Entitled 'Urgente Participatión Bodegas en Vista Jay Miller' (Urgent call to bodegas who want to participate in a visit Jay Miller) the email set out a tariff for those wineries who wished to be involved in a visit by Jay Miller, who is part of the Robert Parker team and who has a responsibility for reporting on Spain for the Wine Advocate and erobert parker.
Jimenez explained that the cost of the visit was approximately 29,000€. Any bodegas wishing to be involved in Jay Miller's visit would be charged according to the following tariff:
1) Between 200-300€ for each wine submitted for tasting.
2) 500€ for each wine submitted for consideration for inclusion in a master class – presumably to be given by Jay Miller during the course of his visit.
3) 1000€ if a bodega wanted to be visited by Jay Miller.
The story took off this morning when Vincent Pousson posted the story on Jacques Berthomeau's blog here. Assuming that the email from the secretary of Asevin to various bodegas in the DOs of Bullas, Jumilla and Yecla is genuine, it raises a number of questions.
a) I assume that the bodgas contacted are all members of Asevin, so is this cost of 29,000 € a fee that the organisation is charging its members in addition to any membership fees Asevin charges?
b) Or is the 29,000€ (or part of it) going to some organisation, company or individual who has undertaken to arrange this visit of Jay Miller? On both Facebook and Jacques Berthomeau's blog there are suggestions that Pancho Campo MW and his Wine Academy of Spain are in some way involved, although from the email above there is no indication that this is the case. However, Pancho Campo MW and Jay Miller have made visits together in the past – Navarra (in July 2011) and Priorat (in the early part of 2011).
c) How was this figure of 29,000€ calculated?
d) How long will Jay Miller be in the Murcia region? 29,000€ is a considerable sum. This would fund a lengthy stay, which might be justified under the code of Robert Parker's 'OURWINE CRITIC ETHICS and STANDARDS':
'I expect the writers to learn about the regions they cover from first-hand observation, but I demand they have access to all wines, not just one particular sub-segment category or region. Moreover, I require full disclosure of such hospitality they receive in the articles that emanate from these trips.'
'It is essential for a wine critic to taste as comprehensibly as is physically possible, which means tasting every significant wine produced in a region or vintage before reaching qualitative conclusions.'

e) Is Jay Miller aware of the tariff set out by Asevin? If he is aware of this tariff when did he learn of its existence?
f) If bodegas have to pay to have their wines tasted by Jay Miller, irrespective of who receives the money, is this not in breach of the Parker code as payment inevitably creates a 'sub-segment category' and he will not have 'access to all wines'.
g) Assuming that Jay Miller is now aware of these charges, will he inform Murcia that he will not be able to visit the wineries if they are expected to pay for submitting samples and for visits?
h) Jay Miller is reported to have received $15,000 for the master class he gave during his visit to Navarra. Is he also receiving an equivalent fee for the master class to be given in Murcia?
i) If Pancho Campo is involved in this visit of Jay Miller to Murcia what exactly is his role? A significant part of Pancho Campo's business is promoting Spanish wine companies and regions. Nothing wrong in that but it does call into question how Jay Miller can guard the 'independence' demanded by Robert Parker if he is closely associated with Pancho Campo. Spanish companies or regions may be tempted to put PR business Campo's way because rightly or wrong they believe he has influence over Miller.
j) In July the Mercados de Vino reported that Pancho Campo MW had charged Navarra around 100,000€ to bring Jay Miller to the region. Jim's Loire covered this here. Was this story correct or was it the region rather than Campo who charged its members? Was Miller's reported $15,000 lecture fee part of the 100,000€ cost of the visit or in addition?
k) Was there in Navarra a tariff similar to that for Murcia for submitting samples and visits?
I hope that some detailed answers will be forthcoming to the serious questions raised by this email from Juan Antonio Ruiz Jiménez.
Posted by Jim's Loire at 20:00

Jim, I’m not sure we always share the same values. There’s no need to, anyway.
I have the feeling you find me a little too straightforward, and simplistic, in a way.
Still, your blog gets more and more fascinating as time goes by. You ask all the right questions, and raise the true issues.
Stay alive !
Never forget capitalists only want one single thing: everything !
PS: with time, you my learn what a nice shirt looks like.

Thanks URL. Always looking for the right shirt! Jim

For some unknown reason, my name does not appear on previous post.
I do not make it an ego issue, but I have strong feelings against anonymous messages:
the name is Charlier, Luc Charlier. And I’m not shaken.

Luc. I should have guessed from the erudition it was you. Simplistic – toi!

Doesn't Parker make enough money to send his people on trips at the Advocate's expense? That would be the clean and ethical way of doing things.

From the RP ethics doc:

'With respect to historic wine regions, The Wine Advocate and eRobertParker.com will continue to cover all of the independent writers’ reasonable travel expenses related to their reviews.'

Assuming that Murcia qualifies as an historic wine region then Robert's dictum is clear.

Another issue: M. Pousson says in his comments that Mr Campo has asked Mr Miller to skip DO vinos de Madrid from his reviews because this DO did not want to pay the fee. This is worth investigating.
Do the WA's interest depend on such fees paid to go-betweens? Is this for real? Is the the organization, is the the man who lectures bloggers on independence?

This is the same thing that happened in Argentina with Jay. If wineries did not pay the fees, their wines were not shown.

It would not be a big deal, if Robert Parker would just be straight forward about his ethical policies (or lack thereof) at the Wine Advocate.

Jay Miller has become quite a nonentity in the retail world because of this nonsense. Parker is not helping the cause.

Daniel. I agree. Clearing up this mess is down to Jay Miller and Robert Parker. Pancho Campo is in the business of promotion whether tennis, rock stars or now stars of the wine firmament. I don't have a problem if he is able to persuade Spanish wine regions and wine companies to pay him substantial fees for his work.

The problem is that Jay Miller and Robert Parker have allowed Jay to become very closely associated with Pancho Campo, so that it makes a mockery of the celebrated independence that Robert demands of himself and his team.

Not only does this put the independence and reliability of Spanish section of The Wine Advocate into question but begins to beg the question, however unlikely this may be, as to whether there exists similar tariffs for tastings and visits by other members of Team Parker.

“It is imperative for a wine critic to pay his own way. Gratuitous hospitality in the form of airline tickets, hotel rooms, guest houses, etc., should never be accepted either abroad or in this country.”
And this: “While it is important to maintain a professional relationship with the trade, I believe the independent stance required of a consumer advocate, often not surprisingly, results in an adversarial relationship with the wine trade. It can be no other way. In order to pursue independence effectively, it is imperative to keep one’s distance from the trade. While this attitude may be interpreted as aloofness, such independence guarantees hard-hitting, candid, and uninfluenced commentary.”

Those who find out win a free subscription to the Wine Attorney.

I just heard last night something similiar to this from a winemaker in Mendoza, Argentina. If thios is what The Wine Advocate is doing I will begin to limit the shelf talkers using The Wine Advocate scores. I will relay this to my fellow retailsers.

Anonymous said...
This comment has been removed by a blog administrator.
2 November 2011 at 15:15

Anon. Thank you for your comment but you make a very serious allegation about the Institute of Masters of Wine, which I will only consider reinstating if you provide me with credible proof.

'Well, seem Pancho is back again in business. The man ran out of Emirates with a ton of cash in his pocket and was for a long time in the Interpol site. ...organizing wine events here in Spain (of course, this lectures were very well rewarded.

10K€ for a couple of hours work anyone? After becoming MW he has started to organize events in Spain to which he brings Jay Miller's and the like. And there goes another 10K€ bill for the international critic. Finally, the sooner these two disappear from the Spanish wine scene, the better.'

That's what I'd call explosive stuff. I don't see how the protagonists can leave the scene unscathed here....

Interesting discussion. Since I'm trying to establish myself as a wine writer in Sweden (where the magazines have no cash to fund travel) it is a really good debate to follow. Hoping for more ethical wine writing as a result of it! /Erica

The dubious methods of Mr. Pancho Campo are by now well known in the Spanish wine trade. If the Institute of Masters of Wine is serious about its code of conduct and ethical standards, it should launch a serious investigation into Mr. Campo's practices. He is causing great harm to the reputation of the MW title.

I AM SPANIARD AND HEARD NO GOOD THINGS ABOUT PANCHO CAMPO BUT LOIRE PRODUCERS AND THOSE WHO LOVE LOIRE WINES SHOULD STAR TO SELL THEIR WINES ALL OVER THE WORLD INSTEAD OF COMPLAINING ABOUT HOW THE WORLD TREAT THEM. IN MY CASE I AM PLEASED THAT LOIRE WINES ARE NOT SO WELL KNOWN SO THAT I CAN ENJOY THEM AT SO REASONABLE PRICES NOTHING TO DO WITH BORDEAUX OR OVERRATED BOURGOGNE

My experience: Jay Miller came to visit our winery, in Navarra, and we did not pay anything, not an euro. there was also a master class and it was free for every one to assist.