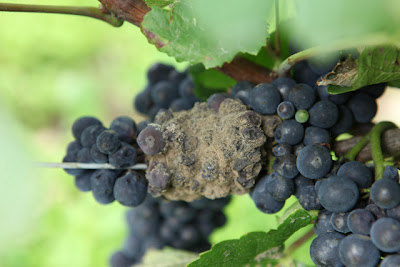 Yesterday the French Appeal Court in Montpellier upheld the sentences handed down by a court in Carcassonne in February 2010 in the fake Pinot Noir scam.
However, the Appeal Court made considerable changes to their sentences.
The scam’s ringleader Claude Courset of the négociant company Ducasse based in Carcassonne, had his suspended prison sentence increased from six to nine months. However, his fine was cut by a third from 45,000€ to 30,000€.
Alain Maurel, Vignobles Alain Maurel and regional president of the Crédit Agricole bank, had his suspended sentence increased from three to four months but his fine was reduced by half from 30,000€ to 15,000€. Good news for a banker that the fine is reduced but does little for M.Maurel's reputation nor that of bankers.
The Sieur d’Arques co-operative, who made 1.3m€ from the scam, had its fine reduced from 180,000€ to 150,000€. Sadly Sieur d'Arques used to have a fine reputation – a pity that those involved in this scam have besmirched this.
Others were not so lucky Montblanc, the commercial arm of the Vignerons de Montblanc, had its fine doubled from 40,000€ to 80,000€. Bad news indeed for Montblanc, who have seen their export turnover drop from 3,394,000€ in the year to August 2007 to 824.000€ in 2008. By the year August 2010 this had collapsed to 317,700€.
Two directors of Caves Pierre Fabre had their fines increased: Jean-Paul Barral from 6000€ to 10,000€ and Didier Beltran from 5500€ to 8000€ with 3000€ of this total suspended.
The scam ran from January 2006 to March 2008. Some 18.5 million bottles of fake Pinot Noir were sold to E&J Gallo and Constellation Wine netting a profit of 7million€ for the fraudsters. A mix of grape varieties, mainly Merlot and Syrah, were passed off as Pinot Noir.
The appeal was held in early June in Montpellier. The decision should have been published on 21st September but a shortage of staff delayed the reporting process.


(Apologies that this post is a bit late. However, last night I was at Le Grand Bornand, where Orange/France Telecom appears to operate a selective system for internet connections – if you are a client of Orange it works fine but, if you are not, then it works poorly at best.)
Posted by Jim's Loire at 16:03