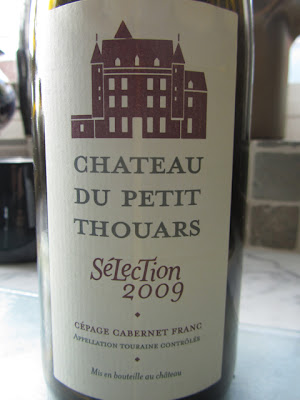 2009 Sélection Touraine Cépage Cabernet Franc, Château du Petit Thouars
A couple of samples of recent bottlings from Domaine de Petit Thouars (AC Touraine). Both wines made from 100% Cabernet Franc. Firstly the slightly leafy but quite opulent 2009 Sélection (5€). I suspect that this will show its best in a year or two, so to drink now I would decant it. Certainly it tasted softer and rounder after 24 hours in a decanter. 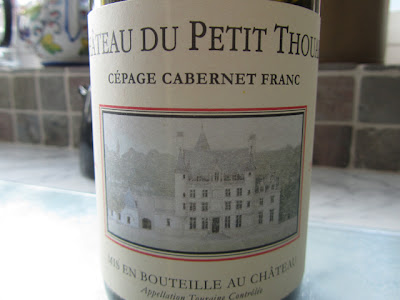 
As you would expect the 2009 Réserve is more structured with a little more concentration with attractive spicy notes. Again it can be drunk now, especially if opened in advance but would be best left for a couple of years, although I think it will probably reach its peak before the still quite tight but fine 2005 Réserve. Again 24 hours in a decanter helped bring out the fruit and it was an excellent match with a plainly roasted pheasant.

Both of these 2009s are remarkable value at just 5€ and 6€ respectively. Furthermore PT still have some stock of the 2005 Réserve a snip at 6€ a bottle. I bought 12 bottles when I last visited the château.
Posted by Jim's Loire at 14:13

A « plainly roasted pheasant” is a very casual way to describe your snack, old boy.
Here, we merely find partridges as pheasants are scarcely seen. When you spot one, it has most probably been released just the day before, for the “real hunter’s fun”.
Thank God (god ?), I’ll be in Belgium for a week or so around mid-november: beware hares, duck ducks, move your tail quails, run to your hole guinea-fowls, go hide being a rock cocks and be a coward mallards. My teeth are cruel and my stomach’s hungry for you.

As I'm sure you are aware we are but simple folk with equally simple pleasures.

However, I have to say that this evening's pheasant was un peu plus cuisinée – pot roasted with some aromatic vegetables – onion, garlic, celery, tomatoes, fresh coriander.

Coriander? With pheasant ? Aren’t you overdoing it a little bit?

“Anyway, I would then recommend a generous but subtle off-dry riesling from Franconia, such as Wirsching’s Julius-Echterberg Spätlese. It has a light pale yellow colour, a very floral and lemoney nose, quite a good grip in the mouth and a semi-long finish. As a matter of fact, it won’t fuck up the flavour of your poultry, Sir!”, I heard the wine-waiter at this posh restaurant explain !

Not at all Luc. I have it from a very reliable sauce that the ancestors of this game bird came from Portugal where as you know coriander is widely used.

De gustibus ....
Re-reading my post, I realize it could sound like some criticism, in a way. I fear my English is as poor as Mr. Ricasoli’s (?!?) and we could blame the misunderstanding on it. I was just enquiring.
In Portugal, small game most often is “Perdiz”, nowadays, and they come in a plenty. I was treated to platefuls of them by João Portugal Ramos when I visited him just after he had built his new estate. Amerigo Amorim did the same, serving me himself .... while playing cat-and-mouse with me, the old bandit !
I used to have a Gordon Setter and – although not a hunter myself – often went to hunting contests to watch those grand dogs at work. Belgium having many stubble fields in november, pheasants are numerous there. But I prefer them “à la brabançonne”, i.e. gently pot-roasted in their juice, with chicory (endives, witloof) added close to the end of the process.
But, it’s a deal: when I get the opportunity to tour magnificent Touraine again, you invite me to a dish of coriander and pheasant!
Have you noticed “magnificent Touraine” sounds like “Magnificent Seven” ?

Although Luc we would be delighted to entertain you in Touraine, the pheasants were bought and cooked in London.