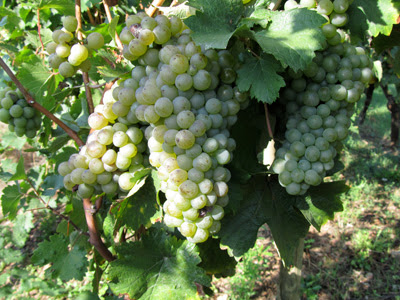 
A visit to the Quarts de Chaume on 26th September demonstrated why Domaine Baumard may have found cryoextraction such an attractive option, at least for some of their vines. I was utterly staggered to see by crop load and the greenness of the grapes on Baumard's vignes larges (widely spaced vines), having no inkling that the Baumard vines and grapes would be so radically different from those elsewhere in this prestigious appellation – ('Cette AOC se classe parmi les terroirs d’exception' – Interloire).


Indeed as I have previously admired this domaine and its wines I assumed that theirs would be very similar to those of the other producers in the Quarts de Chaume. How wrong I was! 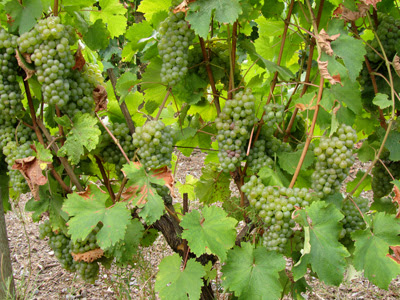 Domaine Baumard: a mass of large, green bunches and dark green foliage (above and below) 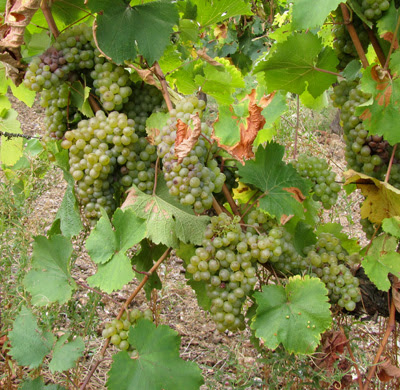 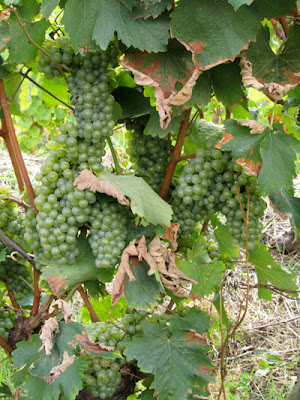 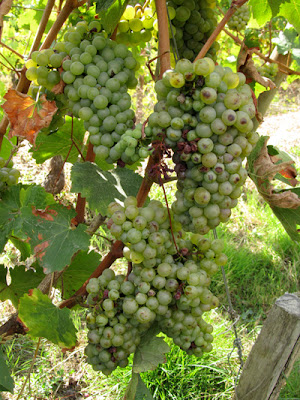 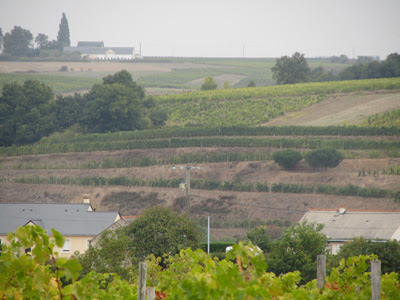 Domaine Baumard: the dark green rows in the middle are the domaine's 'vignes larges' planted on terraces. Their dark green foliage is in marked contrast with neighbouring vines 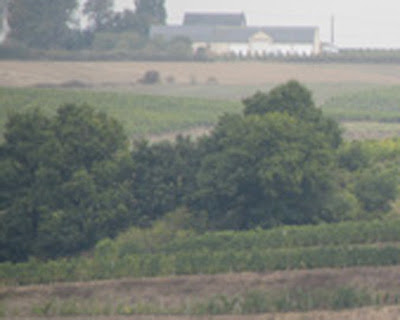 Other vines and grapes in the Quarts de Chaume (photos taken the same afternoon): 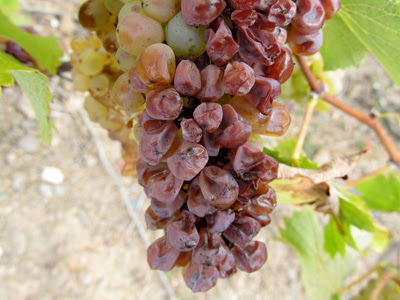 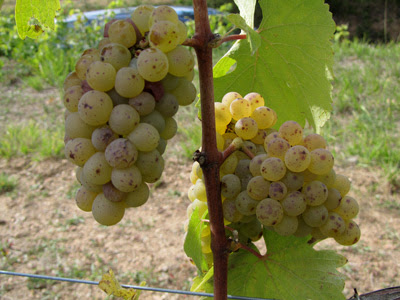 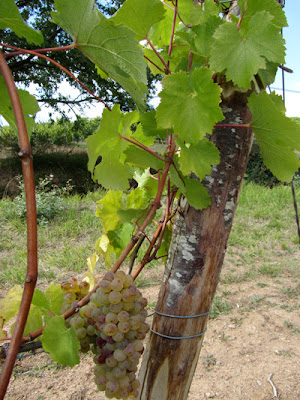 Much lighter foliage
A stark contrast, indeed! It is difficult to see how the grapes on the Baumard terraces (pictured above) could be used to make Quarts de Chaume without the aid of cryoextraction.
**
Following my visit to the Quarts de Chaume I put four questions to Domaine Baumard.

a) Are the terraces entirely used for Quarts de Chaume or are the vines that are heavily loaded normally used for Anjou Blanc or another appellation?

b) Will they all be used for the 2010 Quarts de Chaume or will any heavily loaded vines be declassified?

c) The vineyards of the Quarts de Chaume are subject to a ‘contrôle « à la parcelle » des conditions de production’. Have the vines on your terraces been inspected by the INAO this year and did they consider that your vines met the ‘conditions de production’?
d) From 2011 grapes destined for Quarts de Chaume must have an average potential alcohol of 18%. In order to meet this new requirement will you need to make any changes to the way that your vines on the terraces are managed? Or will you be seeking to overturn the Syndicat’s decision through the courts?
As yet I have received no answers from Domaine Baumard, only an email from Jean Baumard complaining that I had made a 'furtive' visit to their Quarts de Chaume vineyard and that my questions were akin to police questionning and that he had never been asked such questions by a journalist before.
Since Domaine Baumard benefit from the high reputation of the Quarts de Chaume appellation, I think these four questions are entirely reasonable. After all Jean Baumard has already been to court twice to defend the Quarts de Chaume's prestige against the ambitions of neighbouring Chaume and appears to be threatening to go to court again if the INAO accept the proposal to make Quarts de Chaume a grand cru and Chaume a premier cru.

While Domaine Baumard has every right to ignore my questions, I hope they will provide a response.
See previous posts about cryoextraction and the Quarts de Chaume here, here and here.

Jim, I think it's useful to point out that Domaine des Baumard has been making superb Quarts de Chaume for a long time and in many vintages predating cryoextraction. Jackie

Jackie. I agree and I do say that I have admired their wines in the past. I also made this point in a previous post and that they have won a number of awards with their Quarts de Chaume.

Quite relieved you've actually seen the reality behind the wines, Jim - other growers have been quite simply horrified by the use of cryoextraction in this appellation, by Baumard's opposition to 1er cru staus for Chaume - and by the admiration expressed by the press for the wines. I was always taught to remember the importance of vineyard management, botrytis and passerillage in expressing the complexity of the terroir. The wines may be fine, but this is not a domaine to hold up as an example to other growers as has been done too frequently in the past.

Jim, this is a very thorny issue. It's not the first time the Baumards have been put on the firing line. I hope to address the issue more fully in my book. It would take much too long for me to get into all the details here.
I'm sure I don't have to tell you how gossipy and nasty vignerons can be about their neighbors and I'm pretty sure I've been shown the Baumard vineyards by the same people who directed you to them.
You seem to be able to get to Anjou with some frequency. Might I suggest you make an appointment with Jean and Florent and ask the questions about cryoextraction, vignes larges, and the opposition to the Chaume classification in person? (I might just point out here that IMHO the original decret making Chaume a Grand Cru was truly ill-conceived and it was inevitable that someone in Baumard's position would challenge it.

You don't have to be 'gossipy and nasty' to decry yields of around 60 hectos/hectare in an appellation with a permitted maximum 25, Jacqueline. And Baumard's holier than thou campaign to block Chaume's move to 1er cru status (not grand cru - that's for the Quarts de Chaume)is inexcusable. Jim's photos are correct and his 4 questions reasonable.

Thanks Jacqueline. My response is too long for here, so I have chosen to post afresh.