Epeigné-les-Bois: rond point – could do better!

The first few stages of Le Tour usually show up how much street furniture there is now on many roads, especially in built up areas. All too often this results is riders crashing into various roundabouts and other traffic calming features. 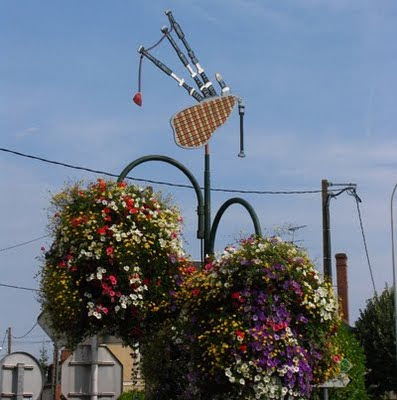 Roundabout in the middle of Aubigny-sur-Nère
Roundabouts are some of the glories of modern France with some very elaborate creations such as this one from Aubigny-sur-Nère not forgetting the famous cows on the way round Rouen. In this respect Epeigné-les-Bois, which has long been forward thinking and dynamic in respect to civic works, has been disappointingly backward over the provision of roundabouts. Although there are now nearly 400 inhabitants in the Epeigné commune, there is but one roundabout well hidden at the end of the village housing estate. Indeed it is more a turning space than a proper roundabout. Furthermore it is disappointingly bare. 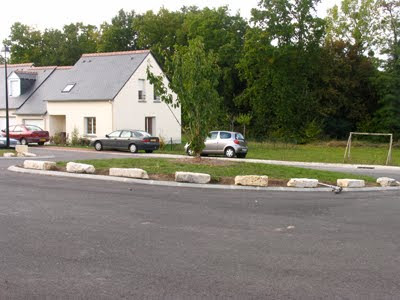 Email ThisBlogThis!Share to TwitterShare to FacebookShare to Pinterest
Labels: Epeigné-les-Bois

Here, we call them traffic circles. Most have traffic lights cos we cannot understand the proper etiquette!!

Bob. They have become amazingly popular in France, especially since the law changed from giving incoming traffic priority.

I'm sure there is a book to produce of photos of French roundabouts – a new art form!

Jim,
Sorry you find the Epeigne roundabout drab and dull. It is of course purely functional to allow the school bus to tour. Being on a communal road rather than a departmental any costs in doing it up would fall 100% on the inhabitants. With money tight, and a real possibility of budget cuts if the taxe professionelle replacement guarantee is cut, I'm afraid it's just going to have to stay that way. We still need to find €500,000 to repair the church ....

Mark. Apologies – a case of mild irony. Much more important that the church is repaired!

Jim,
Guessed that tongue was firmly in cheek on this reportage. Let it be said that our rond-point is certainly dull compared to the other numerous attractions and sites the village has to offer - next being the Moules Frites on 13th July. 500kg of moules to clean this year. Perhaps we could pile the discarded shells onto the rond point for a maritime theme ?