2010 le Tour de France: it's a draw but surely Contador has won 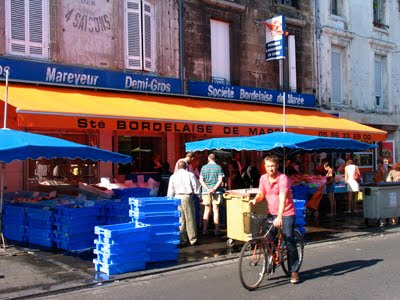 Fish shop in the market in Bordeaux
Watching Andy Schleck and Alberto Contador race up the last 10 kms of the Col du Tourmalet together was certainly gripping, although it was increasingly apparent that they were so equally matched in the mountains that neither could gain an advantage. Inevitably it ended in a draw with Alberto allowing Andy to take the stage victory – his second in this Tour. However it is clearly an advantage for Alberto before the time trial from Bordeaux to Pauillac unless he stops for one too many glasses of cru classé!
Today's flat stage from Salies-de-Béarn to Bordeaux through the pine forests of les Landes will be a nice change after the last four stages in the mountains. Although there will doubtless be a breakaway it is expected that it will end in a bunch sprint in Bordeaux, especially as the Green jersey competition is still so tight. I expect that Petacchi will reclaim the Green from Thor Hushovd. Perhaps another stage win for Mark Cavendish?
Posted by Jim's Loire at 08:37