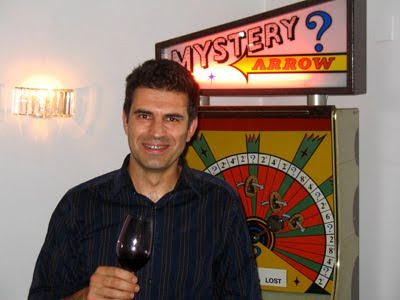 Fabrice Dubosc@Gauthier looking a little apprehensive over the 'Mystery?'
Spent a very enjoyable evening on Tuesday tasting and drinking a range of Alain Brumont’s Madirans and Pacherencs at the new Gauthier Soho restaurant, which has taken over the old site of Richard Corrigan’s fine restaurant in London Soho’s Romilly Street.
We started with five 2009 Madirans, which are being offered for sale en primeur for the first time – fortunately most of them are reasonably priced in comparison to the equivalent quality in Bordeaux. All the 2009s are very deep and densely coloured. The straight Château Bouscassé (£15 a bottle) is soft with rich fruit and surprisingly light, approachable tannins. The Bouscassé Vieilles Vignes (£24) is a step up in both concentration and tannin level, which will need longer to soften. Château Montus (£20) has a similar concentration of black fruits and tannins. The Montus Prestige was my preferred 2009 with rich, sweet black fruits, structure and balancing acidity (£29 tbc). Finally the very deep coloured, dense and decidedly tannic La Tyre (£75). On current showing this is going to need at least a good ten years to come round.
Fabrice Dubosc has been working for Alain Brumont for 10 years now, although he first met him 20 years ago. Curiously it was on the ski slopes where the young Fabrice was working as a ski instructor. He happened to help Catherine Brumont, Alain's wife, and her child, so it was suggested that he ride up the chair lift with Alain. Although Fabrice knew little about wine at this point this was the start of a friendship with Alain. When he started to study wine, Fabrice did a stage (work experience) with Alain. Later after working at Château Margaux – he wasn't impressed at how the cellars were managed at the time, although it showed him how important the terroir was – and then with Guigal in the Rhône Valley. "Marcel Guigal is a great taster," Fabrice told us.

Then ten years ago Alain Brumont phoned Fabrice and asked him to come and work for him and he has been with Alain ever since. When Alain Brumont started in 1979 he inherited 17ha from his father. Today he has between 240-250 ha.
Over dinner we tried a range of Alain's wines starting with two Pacherencs – the fresh and lemony 2008 Château Bouscassé (£13.50) made from 100% Petit Courbu, which is fermented in stainless steel and the richer and fuller 2007 Château Montus (£24.50), which comes from a warmer vineyard and includes 20% Petit Manseng along with the petit Courbu. It is vinified and aged in new oak demi-muids (600 litre barrels) for a year. The Montus was a better match with the foie gras, although the Bouscassé was attractively refreshing.


Then on to three Madirans from the very hot 2003 vintage: the soft and concentrated Bouscassé Vieilles Vignes (£29.75), Montus Prestige (£44) and Montus La Tyre (£75), the single vineyard. Of the three I enjoyed the Montus best as although it was powerful and concentrated its had greater freshness and acidity in its long finish. At 15% La Tyre had lots of soft power and concentration but I'm not convinced that it is worth the extra money.

We finished the reds with the attractive 2000 La Tyre (n/a) fresher and less opulent than the trio of 2003s.

Then a couple of sweet wines strictly speaking served in the wrong order as Fabrice had to be persuaded to show the 2004 Pacherenc Larmes Célestes, which really had been included in case there was a problem with the Frimaire 2000, made from grapes picked in December. There wasn't a problem and the Frimaire was magnificent with lovely concentrated, rich citric flavours but with a super freshness. The 2004 Larmes Célestes was picked in October so it is a very different, lighter style making an attractive apéritif.

I have met Alain Brumont on a number of occasions – the first time in 1988 and then interviewed him in 1989, I think. Then my very initial impression was of a diffident, shy man. That impression is very rapidly dispelled as Alain warms up and his steely determination and passion become evident. He has certainly transformed the image of Madiran and Pacherenc.

I thought it slightly odd when Decanter wrote that "A leading Madiran producer is launching the region's first-ever en primeur campaign in the UK." They could have just said Brumont right away. Everybody would have understood.

JT. I was a little surprised that it received much coverage, especially as Alain Brumont apparently has been selling en primeur in France for some years.