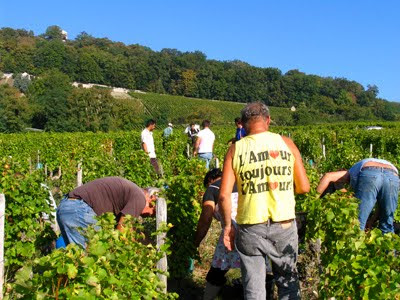 Pickers in Vincent Grall's Sancerre vineyard late September 2009
This post continues the results from the tasting held at the Bureau du Centre in early June. Unsurprisingly the biggest contingent of wines tasted from the three appellations – Quincy, Pouilly-Fumé and Sancerre – were from the latter. A total of 70 Sancerres tasted blind – 63 vinified without any wood, while seven were fermented and aged in wood.
As I have already indicated on posts on Pouilly-Fumé and Quincy, the Sancerres were more variable and less homogeneous than the two other appellations. The summer hail damage seen in the Bué, Chavignol and Sancerre sectors may well have been a factor here for a number of the Sancerres showed a lack of freshness allied with very ripe fruit and high levels of alcohol. This may prove to be a stage they are passing through. In the 2003 vintage a number of Sancerres were initially dismissed as lacking acidity and zip. However after several years in bottle they came into balance, which of course is fine for those who age their Sancerre but less good for the vast majority of the wines that are drunk within a year or eighteen months of the vintage.
My top wines
Michel Thomas et Fils
Michel Thomas has 17 hectares in Sury-en-Vaux. The yield for this cuvée was 60 hl/ha, so no hail damage here. The grapes were picked by machine from vines on argile-calcaire. This wine has attractive weight, balance and a long mineral finish.

Domaine François Crochet, Classique
François Crochet has 10.5 hectares in Bué, so was affected by the hail. The yield for this cuvée was 37 hl/ha. The grapes were hand picked and come from Sancerre's three types of soil – caillottes (80%), 10% argile-calcaire and silex (10%0. The distinguishing mark of François's wines is their precise minerlaity and this is no exception, although in quite a ripe style it has a lovely fresh, mineral quality in the finish.
Domaine Michel Girard et Fils
This is a domaine of 11 hectares in Verdigny, which I understand escaped the hail damage. The average yields here in 2009 were 44 hl/ha and the grapes were picked by machine. Although the wine has 14% alcohol it has attractive citric freshness.

Dionysia, Vin d'Homme
This is from Auguste Natter, the son of Henry and Cecile. Auguste has 3.7 ha in Montigny, the furthest west commune in AC Sancerre. Picked by machine from young vines planted on argile calcaire yielding 37 hl/ha. Although in a leaner style (just over 13% alc), this has attractive, delicate ripe fruit, concentration and length.