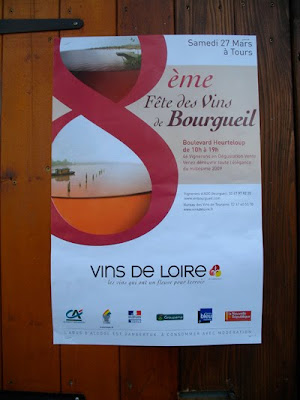 I was delighted to have the opportunity to taste a big selection of the 2009s from Bourgueil on Saturday afternoon in Tours. Admittedly 2009 is a very good vintage, so the standard should be high but there were no undrinkable wines among those I tasted and I tasted all the 2009s on show from the 46 vignerons present. I fancy that 10 years ago this would not have been the case: there would still have been some rough, rustic, unripe wines despite 2009s favourable conditions.

A pity that some of the hordes of wine merchants and journalists heading to Bordeaux for the en primeur tastings this coming week did not take the time to stop in Tours on Saturday to become acquainted with these 2009s. Almost all of them less than 10€ a bottle prix publique from the domaine – many closer to 5€ and likely to be offering more pleasure per euro than many of the highly priced wines being tasted in Bordeaux.

My favourite producers/wines
These are the wines/producers I picked out from tasting the 2009s Don't forget that many of the wines have yet to be bottled.  The light styles will be bottled fairly soon, while some of the vin de garde will not be bottled until 2011. The lighter styles come from vines planted on sand and gravel or gravel, while the more structured wines come from the clay-limestone coteaux.

My impression is that some of the 2009 'cuvée printemps' would in a lesser vintage be considered vin de garde given their concentration and structure.

Listed in the order I tasted them:

Château de Minière (Ingrandes de Touraine): showed three wines. My preference was for the middle cuvée: Château de Minière from 40 year old vines planted on the coteaux. The Cuvée Vieilles Vignes is very concentrated but currently quite marked by the wood, so difficult to assess properly at this stage.

Jean-Marc and Stephane Breton, Vignoble de la Grioche (Restigné). One of my discoveries of the day. 13ha of vines. Liked their cuvée printemps, Cuvée de Santenay (5€) from 30 year old vines  on gravel but was particularly impressed by their Cuvée Manon from 60 YO vines on the coteaux, which will be around 6€ when it is available – a bargain! I see from Stéphane's rather dormant blog  that they won a Saint-Vincent at the Bourgueil Concours 2008 for their 2007 Cuvée Manon.

Delanoue Frères, Domaine de la Noiraie (Benais). 32 ha estate including 7ha in Saint-Nicolas-de-Bourgueil. 10ha in Bourgueil is in conversion to organic viticulture. Won a Saint-Vincent for their rosé. Their soft and supple spring red Cuvée Saint-Vincent comes from 25 year old vines on the gravel. They used carbonic maceration on 10% to emphasize the fruit. The dense and structured Cuvée Prestige is from 50-60 YO vines on the coteaux.

Nau Frères (Ingrandes): I find this domaine consistently impressive and 2009 is no exception. Les Blottières (6€) will be bottled in June, while the powerful and impressive Vieilles Vignes is unlikely to be bottled before 2011.

Jean-Marie Amirault (Benais). 10 hectares – 5ha on the gravel at Restigné and 5 on the coteaux at Benais. Powerful, black fruited and impressive 2009 – not sure which cuvée I'm afraid!

Also liked:
Christophe Chasle/ Xavier Courant: Coteaux
The is a domaine of seven hectares in Saint-Patrice which was run by Christophe Chasle from 1982 to 2008. Last year he decided to retire and sold the domaine to Xavier Courant, who used to be a caviste and then studied viticulture and how to make wine at Montreuil-Bellay. Xavier made the 2009s.

Joël Julienne (Chouzé-sur-Loire):  a small domaine of just 2ha of vines on sand/gravel.

Domaine Jérôme Godefroy  (Chouzé-sur-Loire): Wasn't very impressed with the slightly rustic 2009 but certainly liked the concentration, balance and structure of the 2008 Les Champs Colesses. 8 ha of Bourgueil plus some in Saint-Nicolas-de-Bourgueil.

Much to learn from this appellation. Thanks Jim!

Thank you for this post, I shall keep returning to read more. We love Bourgueil and St. Nicholas de Bourgueil, as do many of our guests.

I will put a link on Frenchholiday at Facebook for our visitors to read and prepare their pilgrimages to the Loire.

Many thanks Sue. Hope to get report finished tomorrow. had to break off this evening to write my Tuesday piece for Les 5 du Vin.

Jim, excellent piece of writing on terroir. I dare you to put your thoughts on that well-known eBob site! Be prepared for fist fights!! Nothing stirs them up more than "terroir".

Many thanks Bob. Inclined to think that I have better uses of my time and energy than spending time on ebob, especially as I send enough time on wine-pages.