Following the concours tasting in L'Hotel de Ville in Tours, there was a vertical of Bourgueil on the theme of the 9s stretching back from 1999 to 1959. The tasting was held in a room reserved for marriages – large and echoey. Sadly some of the audience was not as attentive as the fine commentaries given by Pedico Lagrasse and Jacques Puisais (JP) deserved. 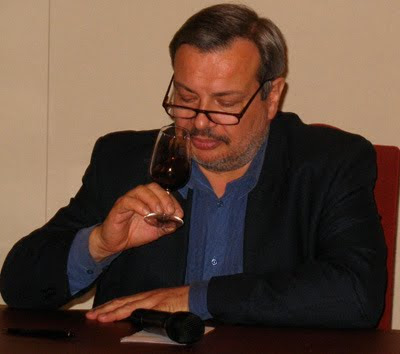 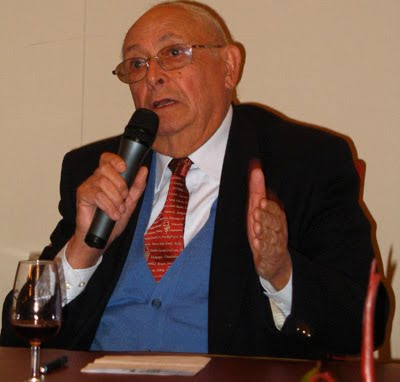 Jacques Puisais and his Burgundian tie 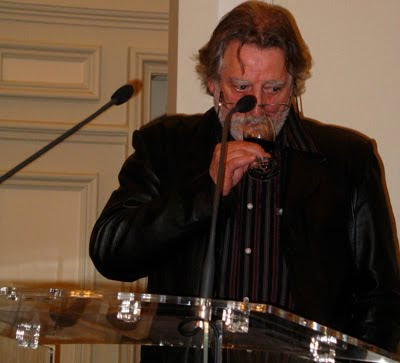 Jean-Claude Audebert: master of ceremonies
Details of the vintages are outlined below. Overall, my favourite wine of the evening was the 1969. Sadly, although the much-anticipated 1959 still had the sense of a hot year, the palate disappointed with a dominant acidity as the fruit had not survived the passage of time.
We started with the 1999. Jean-Claude Audebert of Audebert et Fils recalled that 1999 was looking like an excellent vintage until there was a very heavy storm around Restigné on 3rd September. Despite this there are some attractive wines from 1999. "A year without excesses – temperature, etc.," commented Jacques Puisais. Incidentally Jacques was perhaps being a little provocative wearing a tie listing many of the Burgundian wine villages. Still a similar one for Bordeaux would probably have caused more offence!

Like all of wines in the vertical this was served blind with no indication of producer. The 1999 was mid-weight with some notes of sous bois with attractive easy drinking fruit and some refreshing acidity in the finish. A classic Loire red.

The 1989 moved us from the classic, traditional Loire red style to the abnormal. 1989 was a very hot and dry year – widely acknowledged as one of the great Loire vintages of the 20th century. Perhaps in the top three along with 1921 and 1947. Since this marked the bicentenary of the French Revolution I'm sure the French viewed the exceptional climate of 1989 as a sign of divine approval of the events 200 years ago. "Regarding the sum of the temperature during the year 1989 saw 300˚ more degrees than normal," remarked Jacques Puisais. It was not unusual for the grapes to have reached 14 degrees potential, even on occasions 15.

From the soft and round aromas, including notes of leather, it is evident that the 1989 comes from a very hot year and, like in 2003, you sense that the wine could come from the south of France. There is some acidity in the finish but noticeably less than in a classic year. Possibly very slightly drying in the finish but certainly a wine to enjoy drinking especially with JP's suggestion – a filet de biche presumably cooked for him by Jean Bardet, present at this soirée. Bardet used to have the restaurant and hotel, Jean Bardet, in northern Tours. He retired about two or three years ago.

Perico Lagrasse talked about an unusual excess of sunshine being more difficult to cope with than a lack of sunshine. Although this is fair comment for dry whites, I'm not convinced that it holds true for the Loire except some would argue that in 2003 there was too much sunshine and heat. I suspect that given the choice most people would plump for a 1989 in preference for a 1984, 1977, 1972 or other years where the sun was notoriously shy.

1979 was as Perico correctly said 'l'année le plus modeste'. Definitely old style Loire Cabernet Franc dominated by green pepper notes and initially, at least, lacking charm. It did improve in the glass but really only a wine for Loire fanatics even if does reflect its terroir. I fancy today with similar weather conditions the result would be very different given the improvements seen in viticulture and vinification over the past 30 years.

1969 was a real revelation. "We had a super September," commented Jean-Claude Audebert. "The vintage was very tannic and most of the wines would have spent one to three years in wood before bottling." The 1969 still had lovely ripe fruit with the characteristic, sooty, coal tar notes of Loire Cabernet Franc along with hints of pencil shavings. Good length and a lovely bottle. "You need 30-40 years to really see the truth," said JP, "nowadays we attach too much importance to young wines." JP's food suggestion: veal kidneys grilled over vine cuttings.

The Burgundy tie! I went to a Portal tasting, wearing a T shirt mentioning Luis Pato, Esporao and Crasto!!!

They are still talking about it, LOL,

Watch out for the lynching party, Bob!