More wines from 'France under one roof' (part 2) 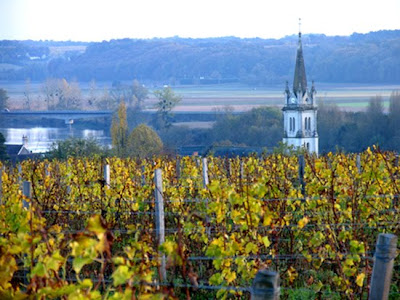 I first tasted wines from this domaine in January last year at a tasting in Vinopolis. The wines are now imported into the UK by Charles Hawkins & Partners Ltd. Tasting with Charles on Wednesday confirmed my impression from last year that the whites from this domaine are their better suit. I tasted their mineral 2008 Sauvignon de Touraine (retailing around £7.75 and closed with a screwcap). Although this has some length I think it is worth paying a £1 more for the 2008 Vieilles Vignes (RSP £8.75), which has greater complexity, lemony weight and attractive minerality.

I also tasted their fresh and spicy 2009 Pineau d'Aunis Rosé before tasting, at Charles' urging, the 2008 Malbec d'Exception (£8.75), which is actually a blend of 60% Côt (Malbec) and 40% Cabernet Franc. Although better than the reds I tasted at Vinopolis a year ago, this is still work in progress – still too many green notes, although there is some concentration here. Is it a question of reducing the yields or just picking a little later – making sure you have flavour ripeness?

2009 Montlouis Sec, Domaine de la Rochepinal, Hervé Denis
Imported into the UK by O/Moore & Co Ltd in Dorking, Hervé Denis is not a name I have come acroos before. His website explains that he started in 1989 with just over 2 hectares of rented vines – 1.94 ha of  Chenin and 0.38 of Gamay. He now has 15.04 ha that includes I was told 10 ha of Montlouis – the rest is Gamay, Cabernet Sauvignon and Sauvignon Blanc. 50% of his production goes to the Montlouis cooperative. 1995 was his first true vintage. The 2009 sec from 80 year old vines is pretty lean at the moment – truly a sec. I expected more character from such old vines but it may be a stage it is going through.

2009 Muscadet Sèvre-et-Maine, Château du Coing de St Fiacre
A couple of promising 2009 samples tasted on Withers Agencies Ltd from this fine Muscadet estate. Pointless saying more at the monent as the wines haven't yet been bottled except that I preferred the more vibrant, mineral sample. 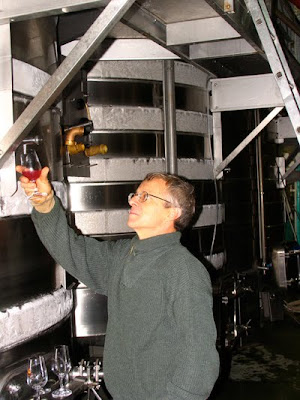 2008 vintage: Pierre Jacolin in his winery at Saint-Cérols
2009 Menetou-Salon, Le Prieuré de Saint-Cérols, Pierre Jacolin
Sadly, due to the sucession of hailstorms that hit AC Mentetou-Salon devastating the crop, this is going to be a rare bottle – a lovely combination of grassiness, gooseberry and grapefruit with the weight of 2009. Pierre stays in the same hotel in centre of Angers for the annual Salon de Vins de Loire. I'm impressed by his wines but somehow I don;'t always get to taste them during the Salon.  I guess there are just too many exhibitors and you have to learn that you can't taste everything.

However, if you are on road from Bourges to Sancerre and want a stop to taste some good Menetou-Salon before crossing into Sancerre, stop in Saint-Cérols and taste Pierre Jacolin's wines.

Somebody sent me a link to a well-known (and rapidly-expanding) importer's blog today. I won't post a link to this, erm, "Cave's" blog. But here's a quote from it;

"We racked and stacked some seriously good kit on our two tables. Scrolling through the FUOR catalogue I couldn’t see a table in the room which wasn’t stuffed with anodyne, manufactured, sulphured, blancmange wines."

It is nice to see that your view of the event differs from their somewhat(!) arrogant view and that there were at least some wines worth tasting, other than theirs. ;-)

Many thanks Leon. I'm working my way towards to Les Caves de Pyrene – certainly some stars but some duds too.

It is too easy to dismiss the big companies. If the 'basic' wines aren't of reasonable quality then the region is likely to get dismissed out of hand. Meaning that an adventurous selection like Les Caves may well never get tasted.

'Anodyne, manufactured' – so what of Domaine Fouassier converting to biodynamics – 50 or so hectares. A brave decision especially if you have a significant work force dependent on your decisions.

Wise words, Jim. Always best to let the wines do the talking!

Leon. Terrible danger of believing your own publicity – a sadly unwise post on Les Caves' Grapevine. I have lot of time for Les Caves but not in this triumphalist mode.

Les caves have done a lot of good for the small growers.
I think that when you have grown has they have it's very difficult not to be bullish about it.
Bernard

Bernard. I entirely agree that Les Caves have done a lot and I'm a big fan. I can understand the bullishness but to dismiss all the other wines being shown is to my mind both foolish and arrant nonsense.

Hi Jim, I see that you like the wines from Domaine Jacolin in Menetou. However whilst the hail did effect product in '09. I am please to inform all that the second label (same wines as the main label)is avaiable in Majestic Wines under the name of Domaine Manay. Hope that helps you track it down!