Chile: some good news from Maule Eduardo Brethauer: The Carignan Club
(Eduardo is one of Chile's leading wine writers and I received details of this initiative last night.)
Viticulture in Chile started in the dry farmed areas (Eduardo uses rainfed*, which I have changed in places to dry farmed) in Maule. And modest people continue cultivating grapes the same way as hundreds of years ago. One of the main objetives of this project is to rescue those grapes and culture. Nowadays, and because of the economical policies, the dryfarm is in real danger. In my opinion this is the only and real Chilean terroir in all the senses of the concept.
The almighty strength of dry farmed areas
The Carignan Club was officially established at Maule-based Viña Tabontinaja on 25th February 2010. This club consists of a group of vintners who have joined not only efforts but also their manly and valiant wines to promote Chile’s dry farm winemaking all over the world. Needless to say that this heritage-loaded endeavor is also filled with sacrifice and perseverance, will and common interests.
Two days later, an earthquake ravaged our country, devastating mostly the south and causing serious structural damages among wineries, including Viña Tabontinaja, the very same winery that hosted the establishment of our Club and entertained us with spit-roasted lamb and some of Chile’s best bottlings (Carignan among them). Our host winery is now devoting its best efforts to helping its workers, who lost their ancient adobe houses. Who lost it all.
More than 300 people lost their lives in the earthquake and the subsequent tsunami. 75% of those casualties occurred in the Maule valleys and coastal areas. Regrettably, most of them died in the tsunami that the navy authorities failed to alert. As a result, hundreds of thousands of families in the south of Chile are in desperate need of food, water and a roof.
René Merino, Chairman of Wines of Chile, confirmed that the wine sector lost as many as 125 million liters or roughly USD 250 million. However, given the plentiful 2009 harvest, the volume of wine lost accounts for 12.5% of that yearly production.
In other words, the situation for Chile’s wine industry is not that hopeless. Those who are most severely affected and living an actual tragedy are small and medium size vintners from the central and southern regions in Chile. 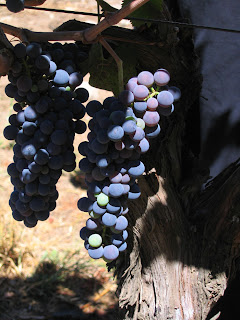 Carménère
The Carignan Club member wineries agreed that the wines they will produce and promote must consist of a minimum of 65% Carignan while the remainder 35% is free of choice, as long as grapes originate in head-trained, dry farmed, old Maule vines (older than 30 years).
The dry farmed requirement – which was the matter of a long debate during our last meeting – is particularly relevant today, for the Maule region alone is home to close to 9 thousand hectares of the rustic País grape variety that coexist with the noble Bordeaux varieties.
This unanimously adopted decision will undoubtedly foster a grafting policy that will directly favor the thousands of families that today –and even before the earthquake- cannot make a living out of their grapes. An interesting fact: last year, País grapes were sold for less than 10 cents a kilo, i.e., less than a kilo of charcoal and even worse, below their production costs.
I am convinced we will get back on our feet and overcome this tragedy with renewed strength. I am certain our industry will grow closer together and common interests will prevail. Chilean wine and Chilean people are heirs to rainfed areas and uncompromising efforts – a heritage, whose history speaks of constant perseverance and endeavor. Both our country and our viticulture were ravaged by a natural disaster but I have no doubt that, as an association, we will not rest until we will see our dear Maule region rebuilt.
Until we will taste again those sweet, generous grapes that will continue to give the world pleasure and hope.
I asked Eduardo whether these vineyards were irrigated – not by drip feed but by traditional flood irrigation.
Ed: Not necessary. Remember that the vines are very old and their roots are very deep. The vines survive mainly with the winter rains. In those areas there is no water and it's really impossible to irrigate.

Thanks for this - do you have any details of where thses wines can be obtained.

It sseems to me that putting money into businesses in effected areas is one of the best ways to help with the relief of those areas (except of course there is always the fear that most of the money end up in the pockets of Messrs Tesco, Sainsbury, Morrison etc. etc.